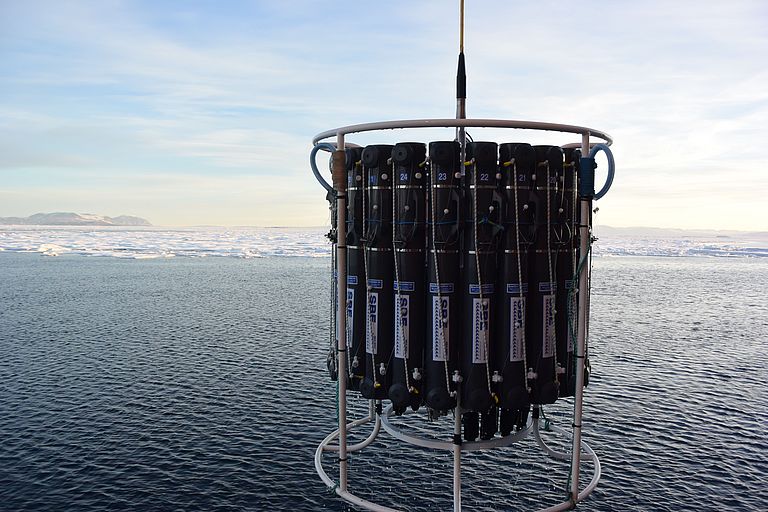 Thanks to favorable weather conditions, the GEOTRACES team was able to take samples directly at the edge of the 79N glacier in 2016. Photo: Pablo Lodeiro 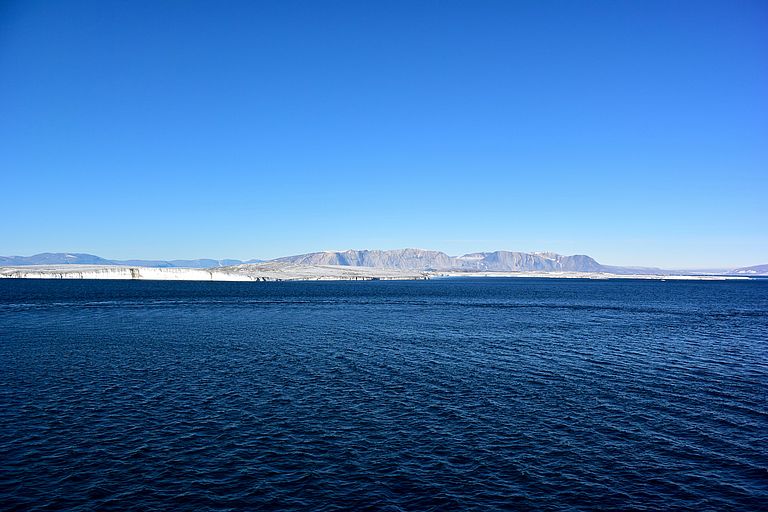 Working at the interface between ice and ocean is a major challenge. Even ice-breaking ships have to be wary of capsizing icebergs and calving glaciers. Photo: Pablo Lodeiro

25 May 2021 / Kiel. The world’s ice sheets are shrinking as a result of rising temperatures. Increasing discharge of meltwater from the Greenland Ice Sheet is well documented and contributes to sea-level rise, but also affects the chemical composition of the ocean with largely unknown effects on marine ecosystems. A new study published in the journal Nature Communications by an international team of scientists led by GEOMAR Helmholtz Centre for Ocean Research Kiel shows that exchange processes in cavities below Greenland’s floating glacier tongues play a dominant role in subglacial nutrient supply to shelf regions.

Nioghalvfjerdsbrae, commonly referred to as the 79° North Glacier, is a giant glacier in Northeast Greenland. It hosts Greenland’s largest remaining floating ice tongue, that extends more than 70 kilometers and covers the entire length of its host fjord. However, fundamental changes to the system are looming. Due to increasing temperatures in the atmosphere and ocean, more and more glaciers are retreating. In July 2020, the Spalte Glacier, an offshoot of the Nioghalvfjerdsbrae tongue, disintegrated completely within a few days leaving behind open water. The effects of these changes on the surrounding ecosystems are still largely unknown.

The study is based on research conducted near the edges of the 79° North Glacier in 2016. Due to exceptionally favourable weather conditions, the German RV POLARSTERN was able to proceed right up to the calving front. This gave an international team of scientists working in the framework of the GEOTRACES programme the opportunity to measure physical and chemical processes occurring underneath the glacier. “Working at the ice-ocean interface is incredibly challenging. Even ice-breaking ships are wary of the risks from capsizing icebergs and calving events which are unpredictable,” explains Stephan Krisch, who participated in the 2016 expedition as a doctoral student.

Considering the working conditions near floating glacier tongues, it is no wonder that much of what is known about the effects of glacier discharge into the ocean is based on studies from more accessible glacial runoff on land. However, a large fraction of freshwater from ice sheets enters the ocean below the surface, and is transferred directly into the fjord or coastal sea. At the 79° North Glacier this subsurface discharge accounts for the vast majority of liquid discharge and it differs fundamentally in its chemistry.

Stephan Krisch and his colleagues quantified the flux of the bioessential trace element iron from underneath the 79° North Glacier to the shelf. They showed that iron was primarily derived from sedimentary interactions rather than directly from melting freshwaters as is typically assumed. The long residence time (several months) of seawater circulating inside the large cavity underneath the floating ice tongue allows an equilibrium to be established between sediments and the water column.

The transfer of iron therefore scales with the seawater residence time in the cavity rather than directly to the freshwater discharge. This is an intriguing finding because it means the transfer of iron out of the cavity is actually ten times larger than expected based on freshwater discharge alone. “As climate change drives a loss of the ice tongue, we will likely see a much stronger connection emerge between freshwater and ocean chemistry”, says Stephan Krisch. “In that context, the collapse of the Spalte glacier in July 2020 may have altered iron cycling underneath the 79° North Glacier. Climate change is affecting these systems so fast, that we are struggling to keep up with our measurements”.

In coming decades, the loss of floating ice shelves in response to climate change will affect the chemical and physical impacts that freshwaters have on the ocean. Professor Eric Achterberg at GEOMAR, who’s research group leads the GEOTRACES component of the project says: “These subpolar coastal environments are incredibly challenging places to work, especially to deploy the robust, clean sample collection methods required for high quality trace chemical measurements. Our future challenge will be to employ greater automation so that we can better study the environmental and ecosystem changes occurring as a result of ice shelf retreat and increasing land runoff.”

Please note:
This study was made possible by the ice breaking capabilities of RV POLARSTERN and the interdisciplinary team assembled from GEOMAR, Alfred Wegener Institute, Helmholtz Centre for Marine and Polar Research, the Royal Netherlands Institute for Sea Research and the University of South Florida in the framework of the GEOTRACES programme.

Thanks to favorable weather conditions, the GEOTRACES team was able to take samples directly at the edge of the 79N glacier in 2016. Photo: Pablo Lodeiro

Working at the interface between ice and ocean is a major challenge. Even ice-breaking ships have to be wary of capsizing icebergs and calving glaciers. Photo: Pablo Lodeiro