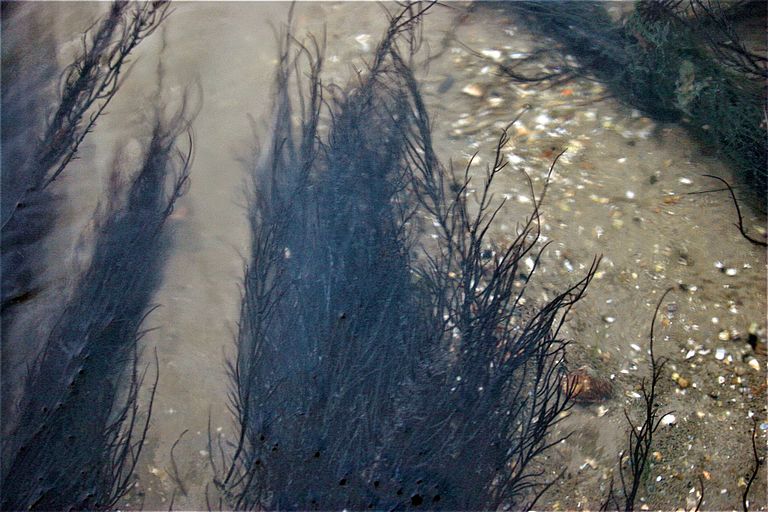 Seaweeds can attract friends and keep away enemies

13 May 2019 / Kiel, Plymouth. The composition of the microbial community living in or on a larger organism plays an important role for its health. Humans and their intestinal flora are a good example of this. Two biologists from the Plymouth Marine Laboratory (UK) and the GEOMAR Helmholtz Centre for Ocean Research Kiel (Germany) have now shown for the first time that an aquatic macrophyte uses surface-based chemicals to specifically cultivate microbes on its surface which protect the plant against diseases. The study was published today in the international Journal of Ecology.

Which microbes live in the intestines or on the skin of a person can have a considerable influence on his or her well-being. The knowledge about the connection between human microbiome and health is widespread even outside science. Just as for humans, the composition of the microbial community plays an important role for other animals and plants, too. However, the mechanisms driving the colonization remain unknown particularly in the case of aquatic plants.

Dr. Mahasweta Saha from the Plymouth Marine Laboratory (UK) and Dr. Florian Weinberger from GEOMAR Helmholtz Centre for Ocean Research Kiel (Germany) have now been able to prove that the red seaweed Agarophyton vermiculophyllum with the aid of chemical substances specifically cultivates microbes on its surface that protect it from other pathogenic microbes. "This is the first empirical proof of this ability in an aquatic plant," says Dr. Saha. She is the first author of the study published today in the international journal Journal of Ecology.

In land-based plants, the deliberate manipulation of the microbiome by means of chemical substances to ward off disease had already been proven. It was also known that seaweeds such as the bladderwrack Fucus vesiculosus can control the composition of the microbiome on their surface. However, the role of these recruited microbes for maintenance of health was not known.

For their study, Dr. Saha and Dr. Weinberger, supported by the Cluster of Excellence “The Future Ocean”, carried out a series of complex investigations on the seaweed Agarophyton vermiculophyllum at GEOMAR in Kiel. This seaweed is originally found in East Asia, but has recently invaded many coasts in the northern hemisphere, including Europe. The two scientists used algal specimens from Korea and the German North Sea for their series of experiments.

Initially, they isolated and identified microbes from the surface of the seaweed from both the native and invasive range. They then identified those microbial strains that could cause diseases such as tip bleaching in Agarophyton vermiculophyllum. At the same time the scientists found that other microbial strains could subdue the effect of the pathogenic strains and thus protect the seaweed.

In a final step, they investigated the relationship between chemical substances on the surface of the seaweed and the composition of the microbiome. "It was clear that some chemical compounds secreted by the seaweed promote the protective strains and deter the pathogenic," explains Dr. Saha.

"Even though this is the first proof of this ability with an aquatic plant, there are many indications that other species may have the same" says Dr. Weinberger. In many coastal ecosystems, seaweed is important as a water filter, carbon sink and breeding ground for other organisms. In addition, some species are becoming increasingly important in aquaculture. "If we understand the natural disease defence mechanisms of seaweed better, natural stocks and seaweed farms may be protected more sustainably," concludes Dr. Saha.