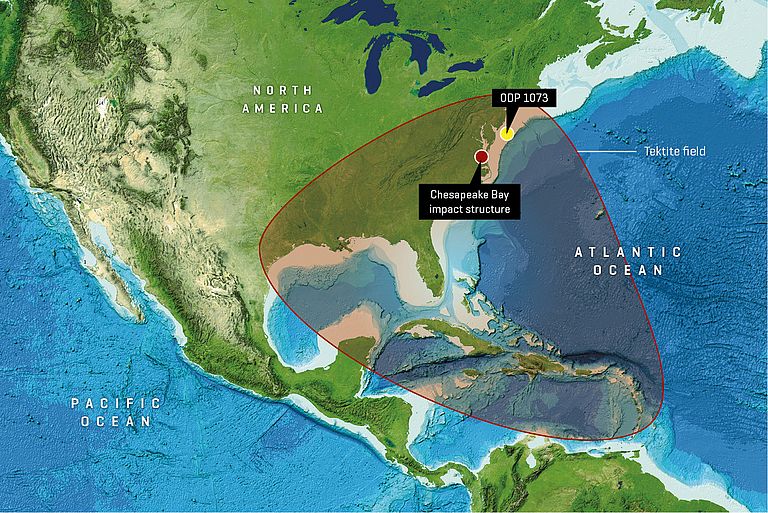 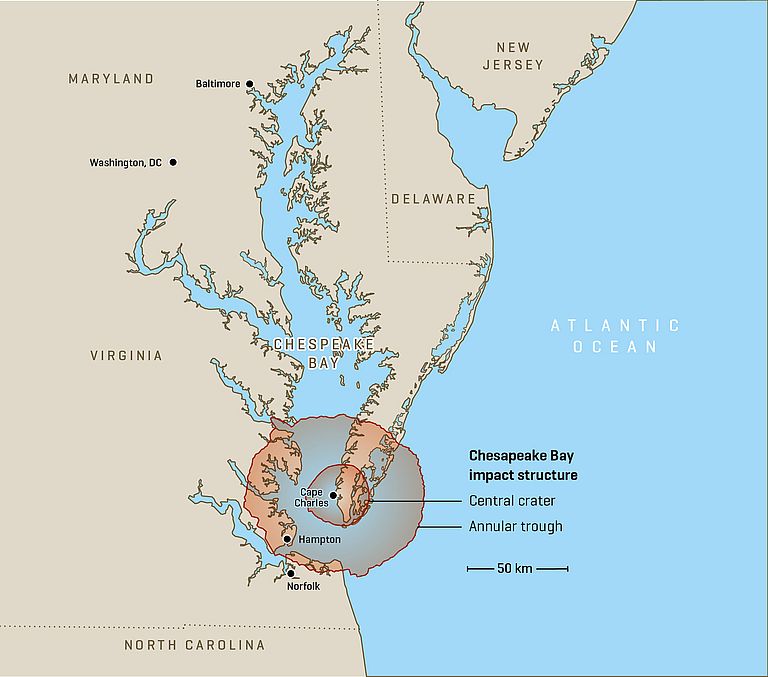 Space exploration on the sea floor

Traces of an extraterrestrial impact event detected in marine sediments

26 July 2019 / Kiel. 35 million years ago, an asteroid/comet hit the North American coast near Washington, D.C. The resulting 40 km-diameter Chesapeake Bay impact crater has been studied by an international research team, led by a scientist now at GEOMAR Helmholtz Centre for Ocean Research Kiel. In marine sediments from a core drilled 400 km from the impact crater, they identified and dated individual crystals that are clearly attributed to this extraterrestrial impact event. The study was recently published in the international journal Meteoritics & Planetary Science.

In the 4.5 billion years history of the Earth, catastrophic events have repeatedly occurred due to impacts of extraterrestrial bodies. About 35 million years ago, an asteroid or comet hit the ocean off the east coast of North America. The impact formed an approximately 40 km diameter crater in the Chesapeake Bay in Virginia, USA, and deformed rocks up to a diameter of 85 km. The nearby area (e.g., modern-day Washington, D.C. located 200 km away) suffered from a fireball (resulting in third degree burns and fires), earthquakes (up to magnitude 8.7), falling molten glass droplets (tektites; up to 4 cm in size and forming a 50 cm thick layer), an air blast (wind speeds greater than 1000 km/h), and a devastating tsunami (20-40 m high). It also resulted in an impact ejecta layer (the North American tektite strewn field) that covered a region of at least 7 million square kilometres, nearly twenty times the size of Germany.

Based on marine sediments obtained during drilling as part of the International Ocean Drilling Program, an international team of scientists were able to identify minerals affected by this impact event and to obtain ages from individual zircon crystals using the uranium-thorium-helium dating technique. The results were published recently in the international journal Meteoritics & Planetary Science.

The dated crystals were tiny, the thickness of a human hair (0.1 mm), and this relatively new dating technique has never before been applied to dating impact craters. This study was part of a larger project to assess the use of this low-temperature dating tool on 20 of the 190 known impact craters on Earth.

“Key to our investigation were zircon—or to be more precise: zirconium silicate—crystals that we found in the oceanic sediments of a borehole, which is located almost 400 kilometers northeast of the impact site, in the Atlantic Ocean,” says the lead investigator and co-author Dr Jo-Anne Wartho, who started the study at Arizona State University and is now working at GEOMAR Helmholtz Centre for Ocean Research Kiel.

The zircons preserve evidence of shock metamorphism, caused by shock pressures and high temperatures associated with impact events in the target rocks. These include parallel multiple sets of very narrow planes of melt that form in shocked crystals, and the breakdown of zircon to zirconium oxide and silica, which occurs at temperatures of about 1680 degrees Celsius and pressures 0.9 million times higher than atmospheric sea level pressure. Together with tektites, the shocked zircon crystals were thrown out of the impact area, where they immediately cooled on contact with the seawater and then sank to the ocean floor.

The Chesapeake Bay crater is now completely buried, but it was discovered in the early 1990s via marine geophysical profiling and subsequent drilling. With a crater diameter of 40 km and a depth of about 1.3 km it is the largest known impact crater in the USA, and the 15th largest on Earth.

35 million years ago, an asteroid struck the east coast of North America. Ejected material from the impact site was distributed over an area of at least 7 million square kilometres (Tektite field). In drilling samples taken from the sea floor 400 kilometres from the point of impact (ODP 1073), researchers have now found clear traces of the impact and dated them for the first time using the uranium-thorium-helium technique. Image reproduced from the GEBCO world map 2014, www.gebco.net

The location of the crater in Chesapeake Bay. It is now completely covered by younger sediments, but was discovered in the early 1990s by marine geophysical surveys and subsequent drilling. With a crater diameter of 40 kilometres and a depth of approx. 1.3 kilometres, it is the largest known impact crater in the USA and the fifth-largest on Earth.  Source: Powars et al. 2015, edited by: Christoph Kersten / GEOMAR