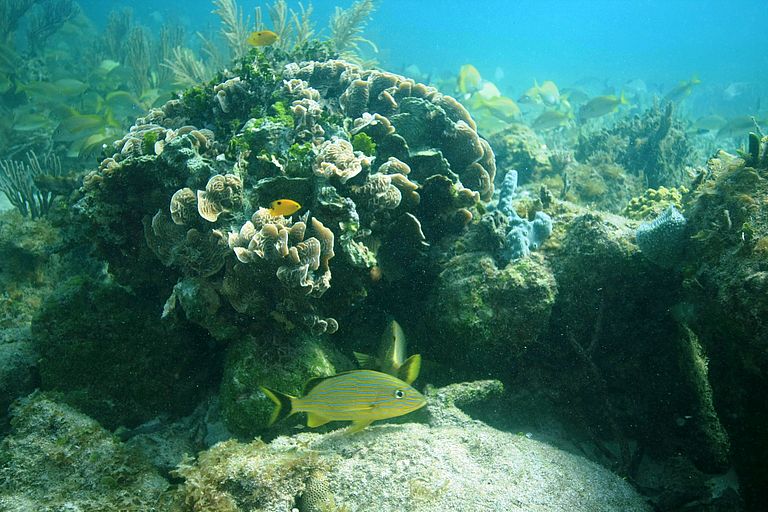 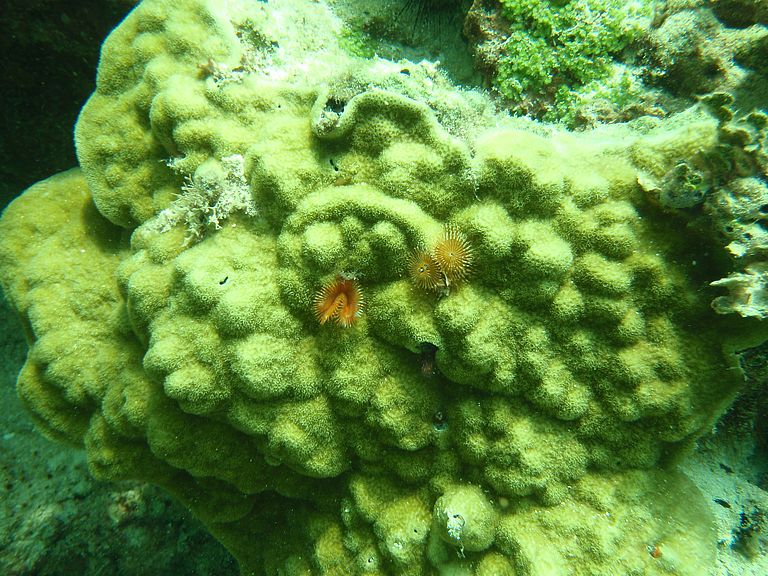 New study on coral growth in times of climate change

08 August 2019 / Kiel. Corals have been dominant framework builders of reef structures for millions of years, creating habitats for a diverse community of species. It is well known that ocean acidification, which is intensifying as climate change progresses, is increasingly affecting coral growth. Scientists from the GEOMAR Helmholtz Centre for Ocean Research Kiel and the University of California have now answered some questions regarding whether and how corals can adapt to these changes by having gained important insights into the regulatory processes of coral calcification. The results have been published today in the international journal Nature Communications.

Corals fascinate amateurs and experts alike: small polyps that extract calcium carbonate from seawater and use it to build their elaborate skeletons. But climate change, with rising water temperatures and increasing ocean acidification, is changing the living conditions of corals at an unprecedented rate. Whether they can keep pace with these changes and adapt is an open question. Now researchers from the GEOMAR Helmholtz Centre for Ocean Research Kiel and the University of California are providing new insights with a study published today in international journal Nature Communications. For this study, which was co-financed by the Austrian Science Fund FWF (Fonds zur Förderung der wissenschaftlichen Forschung) and the US NSF, the scientists investigated the response of the stony corals Porites astreoides to low pH and high dissolved carbon content in their natural environment.

Over millions of years of their evolution, corals have experienced and survived major environmental changes. Like tree rings, their skeletons are an environmental archive that allows researchers to gain insights into the past. From the smallest differences in the chemical composition of coral skeletons, conclusions can be drawn about former environmental conditions. However, many details on the control and regulation of skeletal formation processes of corals are still unknown.

To learn more about these processes, the researchers used a natural laboratory off the east coast of Mexico. There, groundwater seeps from almost circular holes in the seabed, so-called ojos. The water has previously dissolved calcium carbonate from the Yucatan peninsula rocks as well as high carbon dioxide from soil respiration. It is more acidic than normal seawater but contains more dissolved carbon and thus resembles the seawater of the distant future.

Despite these unfavorable conditions, the hard-coral Porites astreoides has settled at these ojos. However, the corals there grow more slowly than similar species outside the ojos. “Unlike corals that are exposed to such an acidic environment in laboratory experiments for only a few weeks to months, the corals we sampled live under such conditions for their whole life history,” says Prof. Dr. Adina Paytan of the University of California Santa Cruz, co-author of the study..

For the study, samples were taken from corals living at different distances from the ojos. The researchers were thus able to study corals of the same species with varying degrees of change in seawater composition.

It is known from earlier research that the ratio of boron and carbon isotopes in coral skeletons provides information on the chemical properties of the calcifying fluid at the time of skeleton formation. "Kiel is one of the few locations where we have the necessary analytics to be able to measure these parameters simultaneously and with high resolution", explains Dr. Jan Fietzke, physicist at GEOMAR and co-author of the study, “We are thus able to measure two important parameters of coral calcification”.

The investigations showed an almost constant chemical composition of all samples. “From this, we can conclude that each polyp creates a calcifying fluid that is largely independent of the seawater conditions surrounding it,” explains GEOMAR marine biologist Dr. Marlene Wall, first author of the study, “yet even small changes in the two parameters studied can have an effect on calcification.” Model calculations for coral growth based on these chemical data resembled the decline in growth measured in the field highlighting their importance to facilitate growth. In an environment with a lower pH, the corals at the ojos must put more effort to raise their pH to the observed level. This process is likely to cost them more energy.

Since the corals must distribute their energy reserves over many important functions such as food acquisition, digestion, reproduction or defense against diseases, they grow more slowly. Other influences, however, such as the calcium concentration in the calcifying fluid or the role of coral symbionts, offer potential for further research. “The study has also shown that we still have a long way to go before we understand all the interactions between changes in seawater and coral growth,” summarizes Dr. Wall.