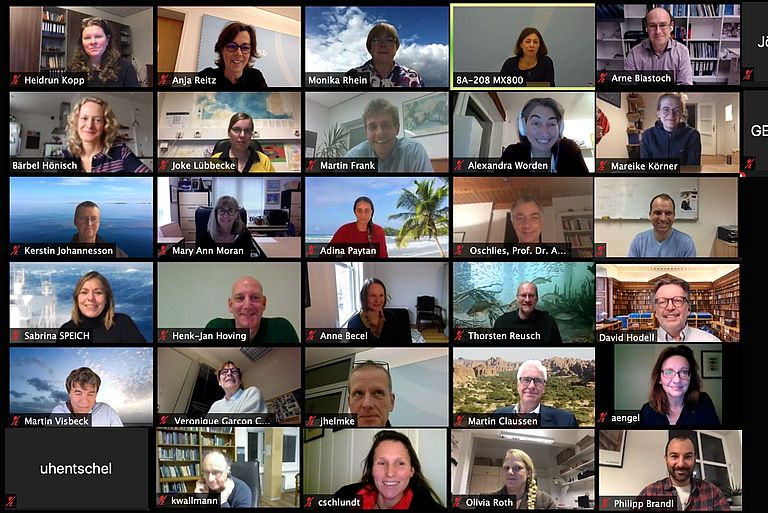 Members of the Scientific Advisory Board in discussion with representatives of GEOMAR in an online conference. Source: GEOMAR

Strategy GEOMAR 2030 discussed with the Scientific Advisory Board

Advisory board of GEOMAR supports ideas for strategic reorientation

3 November 2020/Kiel. The Scientific Advisory Board of GEOMAR Helmholtz Centre for Ocean Research Kiel met virtually from 26-27 October this year to discuss the draft of GEOMARs´ new research strategy. In its recommendations, the international committee supports the ideas of the future scientific focus presented by GEOMAR Director Professor Katja Matthes.

The interaction between man and the sea is at the centre of the new research strategy of GEOMAR Helmholtz Centre for Ocean Research Kiel. Under the title "Our world is the ocean", the director of GEOMAR, Professor Dr. Katja Matthes, presented the considerations on the strategic reorientation developed in recent months to the Scientific Advisory Board of GEOMAR. The advisory board, consisting of 12 renowned researchers from all over the world, meets once a year to review the scientific development of the research centre and to make recommendations for its further development. This year's meeting was very special from several points of view: Monika Rhein, Professor at the MARUM Centre for Marine Environmental Sciences, University of Bremen, took over the chairmanship of the committee; it was the first meeting for a total of six new members and the event had to be held completely virtually due to the corona pandemic. “Since our members come from Australia, Europe and North America, the time difference alone was a challenge”, explains Katja Matthes. For some members this meant a very early start to the day, for others a long night. “That is why we are especially grateful to the colleagues on the board”, says Matthes.

In its recommendations, the Advisory Board particularly addressed the ideas presented on GEOMAR's future research strategy, which have been developed at the centre during the past months. “The Advisory Board welcomed our new approaches and ideas and gave us important recommendations for further development”, explains the director of GEOMAR. “During the coming months we would like to push the strategy discussion forward and finalise it. This is why the advice of the advisory board is so important at this time”, Matthes continued. The committee was also impressed by the integration of young scientists and the cooperation of GEOMAR with Kiel University regarding education and career development. The advisory board particularly emphasized the support of young scientists during the Corona pandemic. Furthermore, the Advisory Board welcomed the equal opportunities measures at GEOMAR and the fact that diversity is to be prioritised more strongly.

“I would like to take this opportunity to thank the members of the Scientific Advisory Board once again for the very constructive exchange. It was a special challenge for all participants to hold this meeting virtually with participants from all over the world”, Professor Matthes concludes.

Members of the Scientific Advisory Board in discussion with representatives of GEOMAR in an online conference. Source: GEOMAR