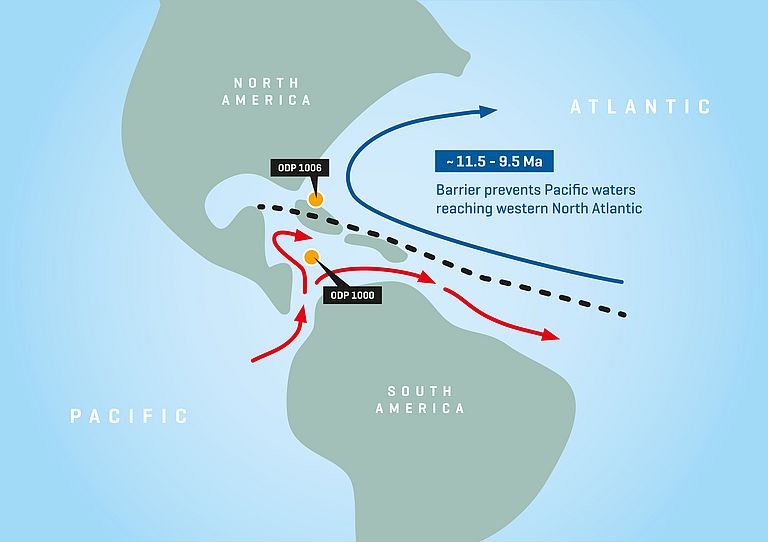 Strong Gulfstream System in the Miocene does not contradict Models

06 September 2019 / Kiel. Differences in salinity of water masses drive the global ocean circulation. Model simulations show that the circulation can be weakened by high freshwater input in key regions. Until now, a strong Gulf Stream system in the Miocene about ten million years ago seemed to contradict this assumption. At that time, the land bridge between North and South America was not yet closed and relatively fresh water from the Pacific reached the Atlantic. A new study by scientists from the GEOMAR Helmholtz Centre for Ocean Research in Kiel published today in the international journal Nature Communications resolve this contradiction.

In the Earth's complex climate system, the global ocean currents play an important role, for example as energy distributors. For this reason, it is a major goal of ocean and climate research to understand how they work—both in the present and in the past. Only on the basis of such knowledge future developments can be predicted reliably.

Among the so far unsolved mysteries of the past is the behavior of the North Atlantic ocean circulation, which also includes the Gulf Stream system, in the Miocene about ten million years ago. "In a phase in which, according to today's understanding, a weakened North Atlantic overturning circulation could be expected, climate archives show a Gulf Stream system that was almost as strong as today's," says Dr. Anne Osborne of GEOMAR Helmholtz Centre for Ocean Research Kiel. Together with colleagues, she has published today a study in the international journal Nature Communications that provides an explanation for this contradiction.

In the Miocene, the Atlantic was somewhat narrower than it is today, but the North Atlantic Circulation already worked in a way similar to today. Salty, warm water flowed from the tropics to the north. There it cooled down and became so dense that it sank towards the seafloor. This sinking was - and still is - the main driving force behind the Atlantic circulation.

However, the boundary conditions in the Miocene differed in one decisive point: the land connection between North and South America in the region of today's Panama was not yet closed. Relatively fresh water from the Pacific Ocean could flow into the Atlantic.

"This low-salt water from the Pacific should have weakened the North Atlantic circulation at that time, which is also indicated by model simulations. However, the natural climate archives contradict this scenario for the period between 9.5 and 11.5 million years before today," says Dr. Osborne.

The scientists have now examined samples from the seabed on the Atlantic side of the Florida Strait. With the help of measurements of isotopes of the element neodymium, they were able to reconstruct the origin of the past flow of the waters. Surprisingly, there was no evidence of the relatively fresh Pacific water during that period. "In the central Caribbean, on the other hand, the influence of Pacific water at this time is clearly detectable," says Prof. Dr. Martin Frank of GEOMAR, co-author of the study.

The team comes to the conclusion that between 9.5 and 11.5 million years ago a barrier must have existed between the central Caribbean and the North Atlantic. It stopped the fresher Pacific waters. The surface current of the North Atlantic Circulation was able to flow past the Caribbean without being weakened. "Whether wind conditions or unknown geological changes caused the barrier has still to be clarified," says Dr. Anne Osborne.

The new results show that the strength of ocean circulation in this epoch does not contradict the model simulations because there was no freshening in the North Atlantic. "For the future, models predict a weakening of the Gulf Stream system if the Greenland inland ice continues to melt, freshening a key region of ocean circulation in the North Atlantic. The Miocene was often seen as a counter-argument, because a freshening at that time did not lead to a weakening. This argument no longer counts," emphasises Dr. Osborne.

In the Miocene the land bridge near modern Panama was not yet closed. Relatively fresh water from the Pacific reached the Caribbean. This has been shown, for example, by studies in the Central Caribbean (ODP1000).  Sediment samples taken from ODP1006 now show, however, that between 11.5 and 9.5 million years before today this relatively low-salt water did not leave the Caribbean and thus could not influence the North Atlantic circulation. Graphic: Anne Osborne/GEOMAR