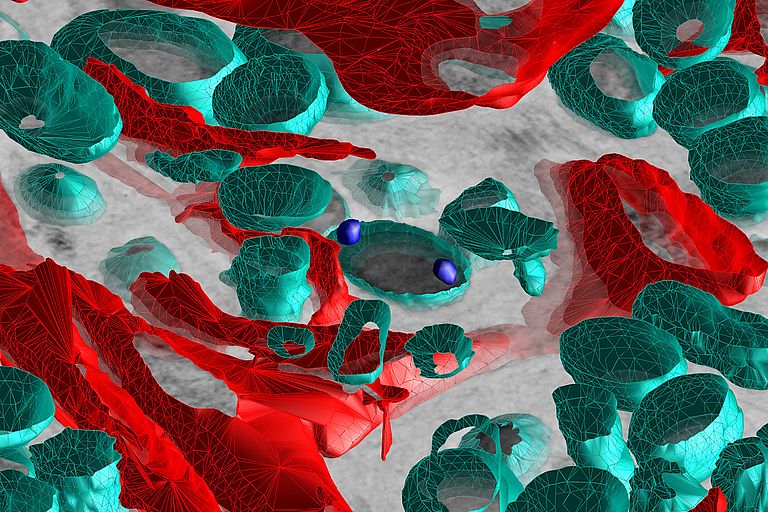 The three-dimensional representation of the sponge tissue illustrates the close contact of sponge cells (red) with the bacteria (turquoise) living in the sponge.. Photo: Martin T. Jahn/GEOMAR 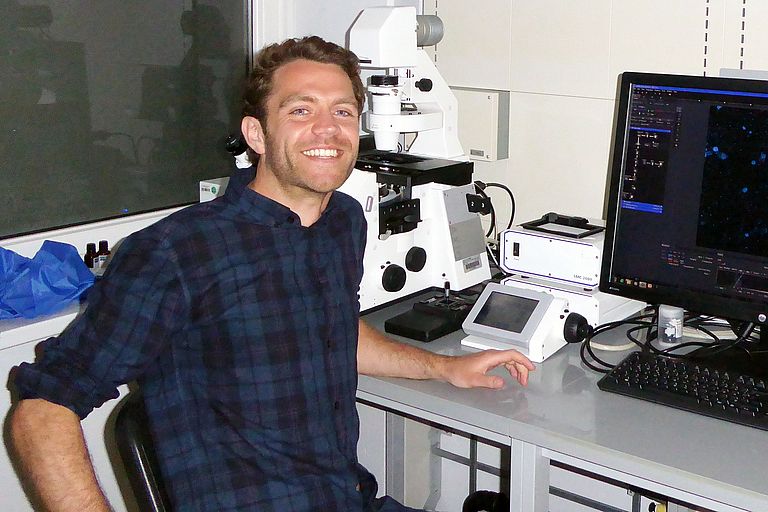 First author Martin Jahn, doctoral researcher at GEOMAR, examined viral composition of sponges and their participation in symbiotic interactions within the framework of the CRC 1182. Photo: Erik Borchert/GEOMAR 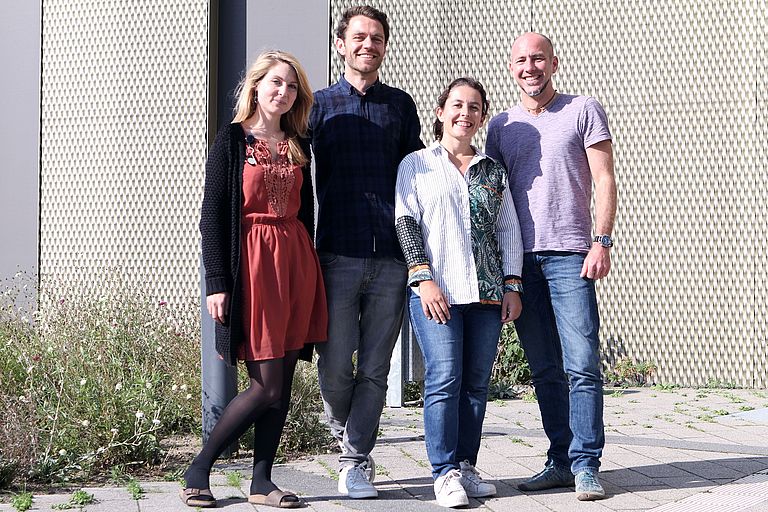 Symbiosis as a tripartite relationship

24 September 2019/Kiel. Sponges form an extensive animal phylum with over 7,500 species worldwide, which occur in a wide range of habitats in the ocean. A special feature of this animal phylum is their ability to filter seawater, through which these organisms obtain their food. In doing so, certain sponge species can move up to 24,000 litres through their body per day. The surrounding seawater contains a wide range of viruses - on average, one millilitre of water contains 10 million viruses. The filter-feeding lifestyle of sponges combined with the rich proliferation of viruses in the ocean therefore might suggest that marine sponges may have a similar viral composition as the surrounding water.

Researchers from the Collaborative Research Centre (CRC) 1182 "Origin and Function of Metaorganisms" at Kiel University (CAU) and the GEOMAR Helmholtz Centre for Ocean Research Kiel have now surprisingly shown that sponges possess a very specific viral sequence signature (i.e., virome), which is remarkably unique even for the individuals of a given species. Certain bacteriophages - i.e. viruses that attack bacteria - are further able to modulate the host immune system and thus protect bacterial symbionts from being digested. While viruses are typically known for their pathogenic properties, the new research findings now also demonstrate a positive influence of bacteriophages on the interaction of host organisms with bacteria. The results were obtained through international cooperation between three countries, including researchers at the universities of Würzburg, Barcelona and Utrecht. The study published today in the renowned journal Cell Host & Microbe thus sheds new light on the symbiosis between multicellular organisms and their microbial communities, which may be regulated by bacteriophages in a tripartite relationship.

In order to analyse the composition of the viral community of sponges, the researchers examined four different sponge species from a defined location in the Mediterranean Sea. In each case, they compared numerous individuals and different tissues of the same species with each other. "Contrary to our original assumption, each sponge individual has its own unique virome even when living right next to each other”. Therefore, no two sponges are alike with regard to their viral community," summarised Martin T. Jahn, a doctoral researcher at GEOMAR and early career researcher at the CRC 1182. "The composition of the virome is thus not primarily determined by the environment or the exposure of the tissue to the surrounding water, but is rather defined by internal factors," said the first author of the study, who collaborated with other early career researchers from four working groups at the CRC 1182.

Notably, the viruses discovered in sponges were largely unknown. "We have found almost 500 new genera of viruses in our samples," emphasised Jahn. "These viruses are completely new, and possibly only occur in sponge, and nowhere else in nature," said Jahn. This order of magnitude shows that the study of viral diversity is only just beginning.

The animal host, bacteria and phages interact with each other

The observed differences between the viral communities of sponges and those from seawater provoked the question whether sponge viruses have specific functions. The researcher team investigated the viral gene inventories and discovered genes which are similar to those of multicellular organisms, where they are responsible for interactions of certain proteins. "This surprising result awakened our special interest," said Ute Hentschel Humeida, CRC 1182 member and professor of marine microbiology at GEOMAR. "We wanted to understand why the bacteriophages have a gene encoding a protein, which we would rather expect in multicellular organisms", continued Hentschel Humeida.

In order to investigate the role of this so-called ANKp protein, they examined its impact in a model system: they expressed the protein in the bacterium Escherichia coli and investigated its effect on certain scavenger cells (macrophages) that occur in the immune system of vertebrates. The result points to a central role of the ANKp protein: it caused E. coli to be significantly less destroyed by the scavenger cells. Strikingly, the protein apparently enables the bacteriophages to interact with the animal host in that it downregulates the host’s immune response, thereby protecting the bacteria from being digested. Therefore, the scientists suggest that bacteriophages are part of a tripartite interaction of host organism, bacteria and bacteriophages, where they provide mechanisms for maintaining symbiotic co-existence.

Extension of the symbiosis concept?

The researchers at the CRC 1182 interpret the new results as a novel and important contribution of bacteriophages to the symbioses of multicellular host organisms and their microbial partners. "We suspect that bacteriophages are major players in the interaction between multicellular host organisms - including humans - and bacteria," summarised Martin T. Jahn. "Viral proteins such as ANKp may even enable this interplay of hosts and bacteria in the first place, because they allow the bacteria to evade the immune system of the host," continued Jahn. "The fundamental concept of symbiosis can therefore be understood as an interaction between three parties," concluded Hentschel Humeida. In the future, Hentschel Humeida and team will further investigate this hypothesis, which is of central importance for metaorganism research, and confirm the functional participation of bacteriophages in host-microbe symbioses.

The three-dimensional representation of the sponge tissue illustrates the close contact of sponge cells (red) with the bacteria (turquoise) living in the sponge.. Photo: Martin T. Jahn/GEOMAR

First author Martin Jahn, doctoral researcher at GEOMAR, examined viral composition of sponges and their participation in symbiotic interactions within the framework of the CRC 1182. Photo: Erik Borchert/GEOMAR