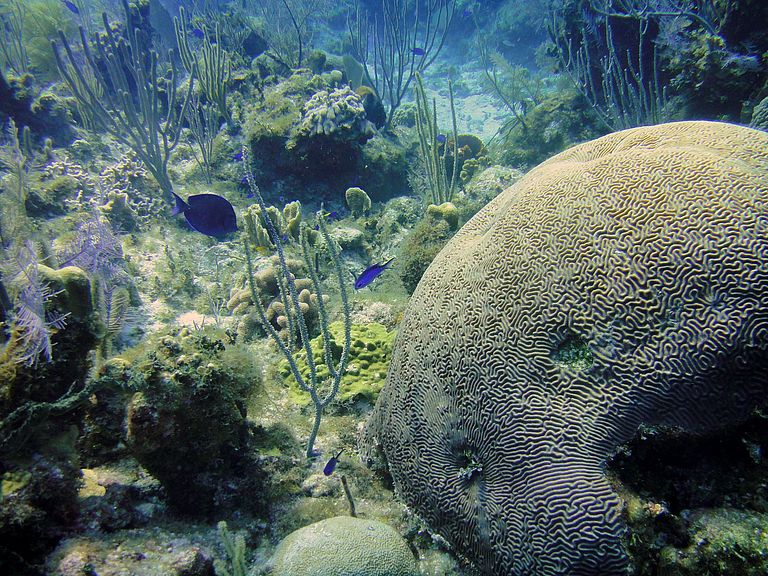 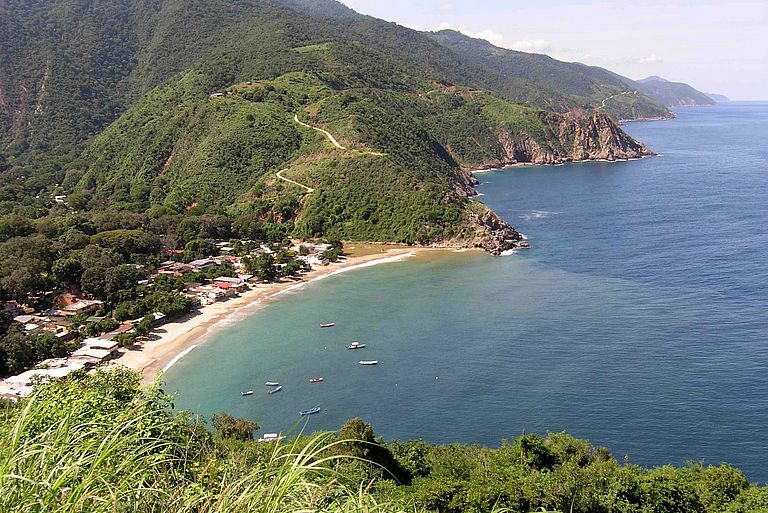 Bay of Chichirivichi de la Costa on the north coast of Venezuela. The corals growing here have been exposed to several environmental stresses since the 1990s. Photo: Steffen Hetzinger

The Coral Thermometer Needs to be Readjusted

El Niños and other stressors can influence climate archives

September 23, 2016. Corals store important information about the environment in their calcareous skeletons. With the help of this information, science can precisely reconstruct climate developments for a period of over ten thousand years from old coral stocks. However, studies under the leadership of the GEOMAR Helmholtz Centre for Ocean Research Kiel show that extreme events such as El Niños strongly influence the corals’ metabolism and in this manner distort the results of the temperature reconstructions. The study has now been published in the journal Scientific Reports.

They are among the greatest builders of the ocean, they form the habitat of numerous species of marine inhabitants and as breakwaters they protect the coasts from erosion – corals fulfill a great variety of functions in the ocean. In addition, for scientists they are very important chroniclers of the environment. In their calcareous skeletons, the corals store detailed information about the conditions under which they live, for example, information about temperature or the salinity of the marine water. With the help of precise analysis methods, researchers can reconstruct the climate from dead corals for over ten thousands of years very precisely.

However, corals are also very sensitive living organisms. Temperature fluctuations or a turbidity of the marine water can strongly affect them. “After the pronounced El Niño events of 1997/98, the so-called coral bleaching damaged about 16 percent of the global stocks,” says the paleoceanographer Dr. Steffen Hetzinger from the GEOMAR Helmholtz Centre for Ocean Research Kiel. Together with colleagues from the RWTH University Aachen, Kiel University and the Freie Universität Berlin, he was able to prove that these events influence the metabolism and the growth of the corals so strongly that the temperature reconstructions can be falsified. The study has been published in the international journal Scientific Reports.

The coral reef at which Dr. Hetzinger and his colleagues undertook their studies lies off the Caribbean coast of Venezuela. “The impacts of El Niños have repeatedly hit the Caribbean heavily. Since the 1990s coral bleaching has repeatedly occurred there,” he explains. Further stressors such as extraordinary plankton blooms put additional pressure on the corals off the coast of Venezuela. “Apart from that, a heavy rain catastrophe washed a lot of mud into the sea so that the coastal waters were clouded for years,” reports Dr. Hetzinger further.

All these events have caused the corals along the coast to grow more slowly or not at all. However, differences between the two main species has also become to light: While one of them reached the same growth rates as before the extreme events after a few years, the other one permanently remained on a low level. Decisive for the use of corals as a climate archive is their metabolism as well as certain types of algae with whom corals live in symbiosis. “As we studied the samples from the corals on certain, important isotope ratios, significant shifts appeared between the time of the environmental stress events and afterwards,” says Dr. Hetzinger.

This is important because exactly these isotope ratios could otherwise serve as indicators for certain environmental data such as temperature or salinity. It is known that extreme events such as El Niños can be recognized in the coral skeletons. But our study shows clearly that you need to consider the physiological changes in the corals if you aim to use them for climate reconstructions,” summarizes Dr. Hetzinger.

Bay of Chichirivichi de la Costa on the north coast of Venezuela. The corals growing here have been exposed to several environmental stresses since the 1990s. Photo: Steffen Hetzinger