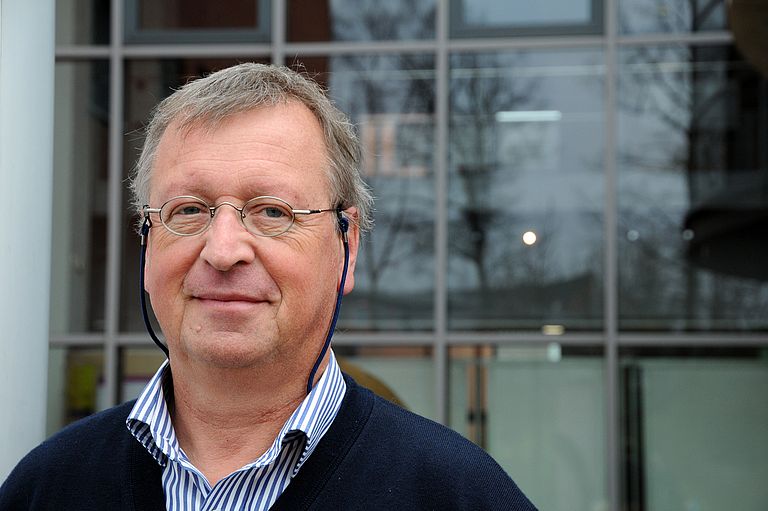 The Coral Whisperer from Franconia

25 April 2014/Kiel. Geologist Wolf-Christian Dullo started his scientific career far from the sea - in the Franconian city of Nuremberg. But for more than 20 years he has explored corals in particular, which represent one of the most important marine climate archives, allowing him to gain many new insights into the history of our planet. On 24 April, the professor of paleo-oceanography at GEOMAR Helmholtz Centre for Ocean Research Kiel celebrated his 60th birthday. On this occasion, a colloquium with numerous companions from all over the world will take place at the Kiel marine research facility.

There are traces of the ocean to be found on land as well, at least former seabeds which were formed from deposits at the bottom of former oceans. Whether chalk, slate or underlying red, all these rocks come from the sea. In this respect, it isn’t too far-fetched for a Frankish geologist like Wolf-Christian Dullo to examine the bottom of the sea: The area around Nuremberg, where he grew up, consists of former ocean floor.

Christian Dullo studied geology, petrography and paleontology at the University of Erlangen-Nuremberg and at first continued his academic career there as well. In 1991 he was appointed professor of paleo-oceanography at the Research Center for Marine Geosciences GEOMAR at the University of Kiel, one of the predecessors of today's GEOMAR. For more than 20 years he has researched the seas from his base at Kiel. He participated in more than 20 major expeditions in the world's oceans, including many as chief scientist.

In particular, the climate archives in marine sediments and corals are his specialty. These sometimes very long-lived marine organisms have stored information on past environmental conditions in their limestone skeletons, long before today’s kind of weather records existed. With the help of complicated analytical methods, Dullo was able to extract much new information on natural climate variations in Earth's history from the lime of the corals. He has worked particularly closely with colleagues at the Centre Européen de Recherche et d' Enseignement of Geosciences de l' Environnement, Aix en Provence, France, where he spent several research sabbaticals. "Modern research nowadays is almost always a joint effort by many scientists," explains Christian Dullo. "Aside from the scientific content, there is always the challenge to get people from different disciplines and nations together to increase the knowledge about the Earth system," says Dullo. For his research Dullo was given the prestigious Leibniz Award of the German Science Foundation (Deutsche Forschungsgemeinschaft) in 2002.

"Professor Dullo is not only an internationally recognized and renowned paleo-oceanographer, he is particularly credited with the development of marine research in Kiel," says Prof. Dr. Peter Herzig, Director of GEOMAR in his laudatory remarks. "Christian Dullo, during his time as director of the Research Center for Marine Geosciences, has prepared the merger of the two marine research institutes, thereby laying the foundation for today's GEOMAR," Herzig continued.

In addition to his research, Professor Dullo has been heavily involved in teaching at the Christian-Albrechts Universität of Kiel for decades. His excursions into Switzerland are legendary among generations of students. "There you are not only able to study mountain convolution with rock formations from different geological eras in a confined space, the history book of the seas opens up right before your eyes, much easier accessed and studied than by descending into the deep sea," says Dullo.

His 60th birthday, which Dullo will be celebrating today at GEOMAR as part of a colloquium with numerous companions from all over the world, is of course an occasion to look back. But for the coral researcher, this is only an intermediate stage. "There is still much to discover and unravel. And as long as I enjoy doing it, I will be guided by curiosity and research. I look forward to it"