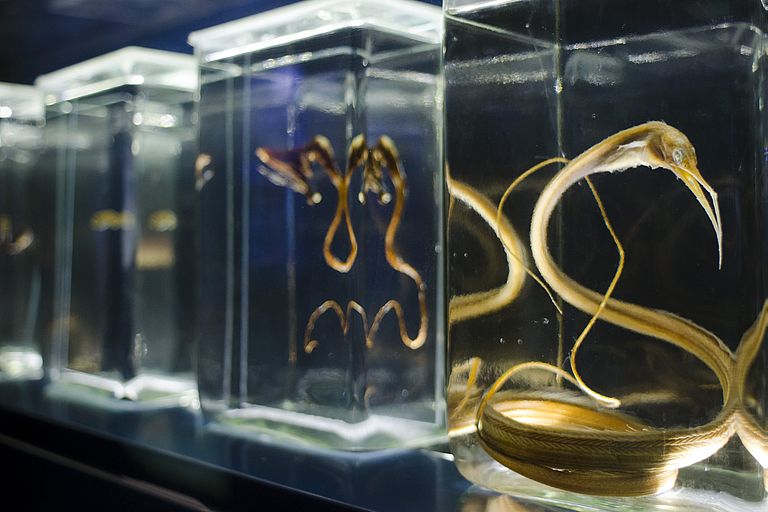 The Deep Sea at the Aquarium GEOMAR

22 November 2013/Kiel. A new exhibition module at the aquarium of the GEOMAR Helmholtz Centre for Ocean Research Kiel now grants immediate insight into the strange-looking and fascinating world of the deep sea. A reading reminiscent of the beginnings of Germany’s deep sea research over 100 years ago officially opened the module yesterday.

With luminous fishing gear on their heads, mouths larger than their bodies, and seemingly dangerous fangs, many deep-sea fish may look like creatures from a science fiction movie to the land-based observer. In fact, the anglerfish, viperfish or the snaketooth fish come from a habitat that’s just as inaccessible, hostile and strange to us humans as the universe. But this habitat, the deep sea, is located on our home planet - and it even occupies more than half of its surface. The Aquarium of the GEOMAR Helmholtz Centre for Ocean Research Kiel now offers a little insight into this fascinating ecosystem. A new exhibition module shows 14 carefully prepared deep-sea organisms with corresponding explanations. "Such original exhibits from the deep sea are extremely rare and therefore a real treasure," says Dr Gerd Hoffmann-Wieck, exhibition coordinator at GEOMAR.

The specimens shown in the exhibition are from the collection of Dr Johannes Kinzer. The now 84-year-old marine biologist collected those during numerous expeditions in the 1960s and 1970s in the Atlantic and Indian Oceans. Starting in 1971, Dr Kinzer slowly established the aquarium at the former Institute of Marine Science (IfM) and, from 1972 until the beginning of his retirement in 1994, was its scientific director. In this role he was dealing mainly with fishes that live in shallower areas of the oceans. But Dr Kinzer had carefully preserved and saved the objects of his previous research. "We are very pleased that he has now made his collection available. That allows the Aquarium to show the subject of the deep sea in an exciting way. Simply because the deep sea is one of the research areas of today's GEOMAR," says Dr Hoffmann-Wieck.

In addition to the specimens, posters provide information on the deep sea, the particular circumstances of the animals there, and today’s technology used to scientifically explore the seabed in several thousand meters depth. The exhibition module was made possible by a generous donation from the Bingo! project funding and the support of the Friends of the Aquarium GEOMAR.

During the official inauguration of the exhibition module, GEOMAR also recalled the beginnings of deep-sea research in Germany. In the years 1898 to 1899, the "Valdivia", a steamer turned research vessel, sailed the Atlantic Ocean and the Indian Ocean under the scientific leadership of chief scientist and zoologist Carl Chun. The aim of this first German deep-sea expedition was, among other things, to collect biological samples from more than 500 meters depth, then and now a technically rather complex venture.

The cruise report that Carl Chun issued after the spectacular research expedition has now been reissued in slightly revised form and supplemented with additional information by Andreas von Klewitz. At yesterday’s official opening of the deep-sea module at the Aquarium GEOMAR, Klewitzwill read from his book "Carl Chun, die Valdivia und die Geheimisse der Tiefsee” (Carl Chun, Valdivia and the treasures of the deep sea). Thus he took his audience back to a time when people for the first time saw glimpses of the exotic wildlife of the deep sea. Maybe at the time, these insights seemed like a Jules Verne novel turned into reality.