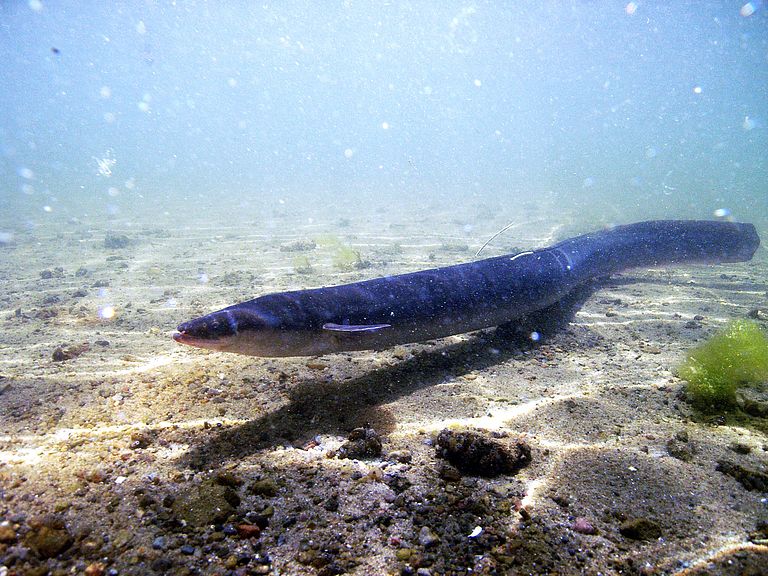 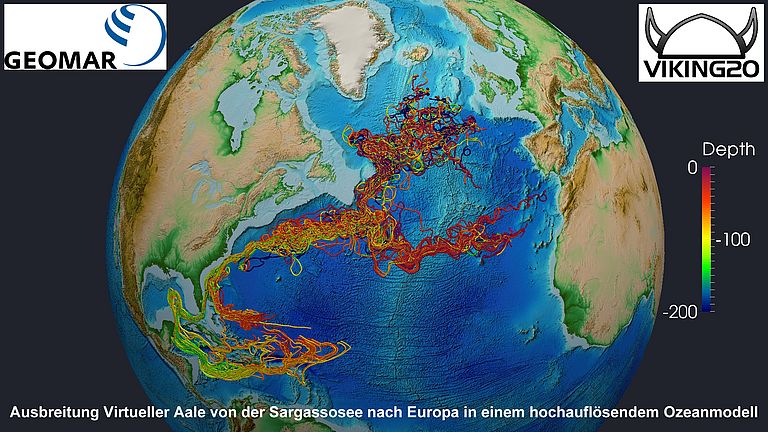 Migration of virtual eels from the Sargasso See towards Europe in a high-resolution Ocean Model. Depending on wind and current conditions the virtual eels take two different ways: a) the longer one through the Carribean and b) the shorter one directly from the Sargasso Sea to the Gulf Stream. At the bottom of the text you find a link to an English high-res version of this image. Model: GEOMAR

The fate of the Eels

26 December 2013/Kiel. The European eel is one of the world’s many critically endangered species. Comprehensive protection is difficult because many details of the eel’s complex life cycle remain unknown. In a multidisciplinary study, biologists and oceanographers at GEOMAR recently demonstrated the crucial influence of ocean currents on eel recruitment. They did so by using, among others, a state-of-the-art ocean model developed in Kiel, in combination with genetic studies. The study appears in the international journal „Current Biology“.

Smoked, fried or boiled - the European eel (Anguilla anguilla) has always been a popular fish in Europe. Even though people have consumed it for millennia, the origin of the eel has long been shrouded in mystery. While the fish spend most of their lives in fresh and coastal waters, spawning and the birth of the larvae take place in the Sargasso Sea in the central Atlantic Ocean, about 4500 km away from the European coastlines. “Because the observation of eels in the Sargasso Sea is scarcely possible, some details of the life cycle are still unknown” says biologist Miguel Baltazar-Soares, from GEOMAR Helmholtz Centre for Ocean Research Kiel.

In a multidisciplinary study recently published in the international journal “Current Biology”, biologists, geneticists and theoretical oceanographers at GEOMAR, together with colleagues from Hamburg, London, Belfast and Antofagasta (Chile), discovered a relationship between ocean currents and the variation in eel recruitment.

The study is based on a latest generation ocean model developed in Kiel. Originally it was used to simulate the effects of melting Greenland glaciers on the North Atlantic. “It has a resolution approximately ten times larger than the conventional ocean and climate models,” explains Prof. Dr. Arne Biastoch, a theoretical oceanographer at GEOMAR. “The new model allows us to understand even small-scale changes in the ocean, so we came up with the idea of using it for a simulation of eel migrations,” adds Miguel Baltazar-Soares, lead author of the new study.

The model simulation was run for 45 years, and in each of these years, the researchers seeded the Sargasso Sea with 8 million tiny drifting particles. “They represent the eel larvae which, for the first few years of their life, mainly drift with the currents,” says biologist Dr. Christophe Eizaguirre from GEOMAR, who initiated the study. External factors, like wind and weather conditions, were the same in the model as the conditions observed in each year from 1960 to 2005. “We were able to track how the larvae migrated to Europe. Only those who reached the European shelf seas within two years were considered viable. This also corresponds to eel life cycle,” explains Dr. Eizaguirre.

In fact, the eel recruitment in the model fluctuated significantly, mimicking the patterns reported across Europe. “In the early 1980s, for example, only a fraction of the larvae managed their way to Europe,” reports Professor Biastoch. The researchers found that small-scale, wind-driven ocean currents strongly determine the eel population fluctuation. Depending on the presence of regional currents in the Sargasso Sea, the larvae’s path to Europe was either extended and led to low recruitment or shortened leading to high recruitment in Europe. “We had not seen these flow changes in any of the older ocean models. But they seem to play a crucial role in the migration of the eel larvae,” explains Professor Biastoch.

Combining those discoveries with genetic analyses, the scientists found evidence that, contrary to what is typically thought, eels do not return to random locations in the Sargasso Sea to reproduce but rather return to where their mother spawned in particular locations within the Sargasso Sea. “This is a new finding - so far, it was assumed that the mating in the Atlantic takes place completely independent of the area of origin and future scientific expeditions will have to verify this result in situ ” says Baltazar-Soares.

The ultimate fate of eels making the long migration from the Sargasso Sea to the continental waters of Europe is still very difficult to predict, even using state of the art techniques. Indeed, from the 1960s to the 1980s, the results of the computer simulation matched up well with the observed occurrence of young eels reaching the European coasts. After that, however, the status of eel populations seems to be disconnected from the climatic influences in the Atlantic. “Since then fishing pressure, habitat destruction in European rivers and diseases appear to play an increased role” said Baltazar-Soares. Today, the European eel is on the list of endangered species and biologists, managers, fishers and politicians across the continent are working together to conserve eels and the valuable fisheries they support.

Although the current study does not solve all the lifestyle mysteries of the eel, “it clearly shows that not only biological, but also climatic, oceanographic and genetic conditions must be taken into account for a meaningful management of fish stocks,” says Dr. Eizaguirre who has recently relocated from Kiel to Queen Mary, University of London. And for co-author Arne Biastoch the study illustrates the potential that lies in the interdisciplinary cooperation between biologists and oceanographers: “The ocean models are becoming more and more accurate. This offers a great opportunity for reassessing the threats to marine organisms and understanding their fundamental biology.”

An adult European eel Anguilla anguilla. Photo: J. Schröder, GEOMAR
Migration of virtual eels from the Sargasso See towards Europe in a high-resolution Ocean Model. Depending on wind and current conditions the virtual eels take two different ways: a) the longer one through the Carribean and b) the shorter one directly from the Sargasso Sea to the Gulf Stream (English version).  Model: GEOMAR

Migration of virtual eels from the Sargasso See towards Europe in a high-resolution Ocean Model. Depending on wind and current conditions the virtual eels take two different ways: a) the longer one through the Carribean and b) the shorter one directly from the Sargasso Sea to the Gulf Stream. At the bottom of the text you find a link to an English high-res version of this image. Model: GEOMAR