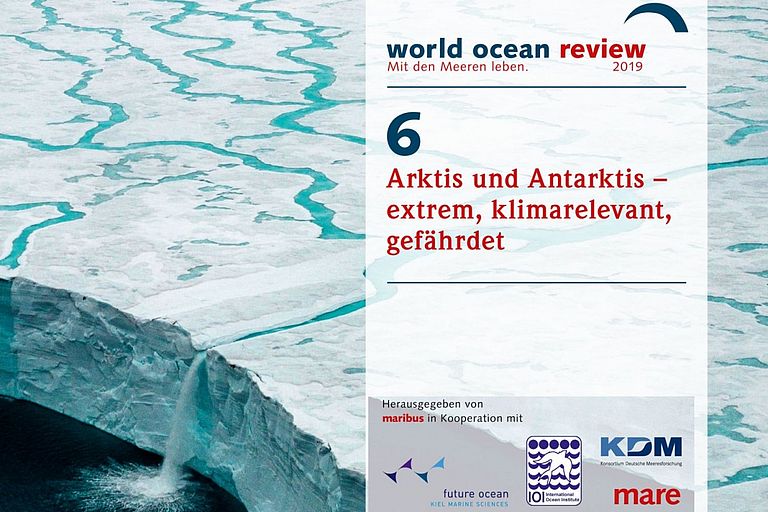 The Polar Regions - The End of the Eternal Ice

07 November 2019/Kiel, Berlin. The new "World Ocean Review 6", published by mare in cooperation with the German Marine Research Consortium and the Future Ocean Network in Kiel, focuses on the dramatic climate-induced changes in the Arctic and Antarctic and their far-reaching consequences for humans and the environment.

The polar regions play an exceptional role in the Earth's climate system. The almost endless snow and ice surfaces of the Arctic and Antarctic act like a gigantic mirror and radiate up to 90 percent of incident sunlight back into space. Because of this, they not only slow down the warming of the Earth, but also create large temperature differences between the cold polar regions and the warm tropics. This disparity, in turn, drives the global wind and ocean currents and contribute significantly to the fact that the heat stored in the sea and in the atmosphere is distributed over large areas of the globe and that people, animals and plants find reliable living conditions everywhere in the world. What happens in the remote polar regions is therefore of concern to each one of us. Numerous demonstrations not only by climate activists and worldwide Fridays for Future protests in recent months have impressively pointed out that such reliable living conditions are not self-evident but can only be understood as the result of a forward-looking, intergenerational and environmentally conscious policy.

The sixth volume of the publication "World Ocean Review" (WOR), published with the support of the International Ocean Institute (IOI), is therefore entitled "The Arctic and Antarctic - extreme, climatically crucial and in crisis". It is edited by climate and polar researchers from the German Marine Research Consortium (KDM), the Future Ocean Network in Kiel and the journal mare, who are responsible for the overall concept and preparing the scientific contents in a way that is comprehensible to the public. As a bundling of the expertise of German marine research, the new issue is dedicated to these two extreme and highly contrasting regions of the Earth. The issue provides profound information on their origin and significance for life on Earth, as well as on the observed climatic changes and their dramatic consequences, some of which extend far beyond the borders of the polar regions.

"Until a few years ago, the Arctic and Antarctic realms were destinations of historical expeditions such as those of Scott or Amundsen and home to polar bears or penguins," says Nikolaus Gelpke, editor of "WOR", founder of the journal mare and board member of the International Ocean Institute (IOI). "Since the new IPCC special report 'Ocean and Cryosphere in Climate Change', however, we have known about the outstanding importance of the polar regions for our climate future. The observed changes are symbols for the consequences of our industrial development, the melting of the formerly eternal ice stands for the loss of control of our actions. Our 'WOR', as an excellent complement to the IPCC Special Report, can hopefully help to deepen our understanding of cause-and-effect relationships".

The Arctic is warming more than twice as fast as the rest of the world and is now showing a completely new face. Last summer alone, the world witnessed the widespread burning of dried out tundra areas in Alaska and Siberia, the melting of the Greenlandic ice sheet on its surface during a heat wave, and the shrinking of the Arctic Ocean's sea ice cover to the second smallest residual area since satellite measurements began. In the Antarctic, heat comes mainly from the sea. Warm currents increasingly penetrate under the floating ice tongues of West and East Antarctica and melt these so-called ice shelves from below. As a result, not only do more icebergs calve, the glaciers now also transport more ice from the interior of Antarctica to the sea, so that their contribution to global sea-level rise increases and the ice sheets of West and East Antarctica thin out overall.

However, what consequences do these, and other climatic changes have for the highly adapted flora and fauna of the Arctic and Antarctic? What are the chances of survival for polar bears, walruses, polar cod, krill and all other sea dwellers who depend on sea ice for their foraging and breeding? How does the vegetation change on land? WOR 6" explains the unique adaptation strategies of polar flora and fauna and the extent to which polar species are likely to be able to adapt to rising air and water temperatures, dwindling food sources and migratory competitors.

But where glaciers and sea ice are disappearing, people also gain access to previously hidden resources and raw material deposits. The Arctic states in particular therefore see climate change as an opportunity to develop their northern territories economically. One focus is on the expansion of tourist infrastructures such as airports and berths for cruise ships, because the worldwide demand for trips to the polar regions is increasing - grotesquely, above all, because many nature lovers and adventure tourists have come to the conclusion that now is the last chance to see the ice landscapes of the Arctic and Antarctic with their own eyes. At the same time, mining and oil companies are currently investing large sums in the exploration and extraction of raw material deposits in the Arctic, above all in Russia. The "WOR 6" shows which expectations are attached to this industrialization, which risks and dangers go along with it and which protection precautions are taken.

"The developments in the polar regions illustrate one of the challenges for ocean research to develop solutions across disciplines. The coming decade of marine sciences for sustainable development, which aims to combine, increase and make available knowledge in order to enable clever development paths in human-ocean relations, gives us hope," says Prof. Dr. Nele Matz-Lück, spokesperson for the Future Ocean Network and maritime law expert at the Walther Schücking Institute for International Law at Kiel University.

The "World Ocean Review 6" was presented on 7 November 2019 at the Schleswig-Holstein representation in Berlin during an evening event with guests from politics, business, science, media and education.

The sixth maribus publication "Arctic and Antarctic - Extreme, Climatically Relevant and in Crisis" continued the cooperation with WOR's partners, who stand for years of commitment to the oceans and the highest scientific level:

The "World Ocean Review 6" was published with a total circulation of 20,000 copies. The publication is not sold but distributed free of charge because there is no intention to make a profit. The WOR is available at www.worldoceanreview.com. The entire publication was published online at the same time as the printed edition. In addition to the German version, an English edition will also be available shortly.