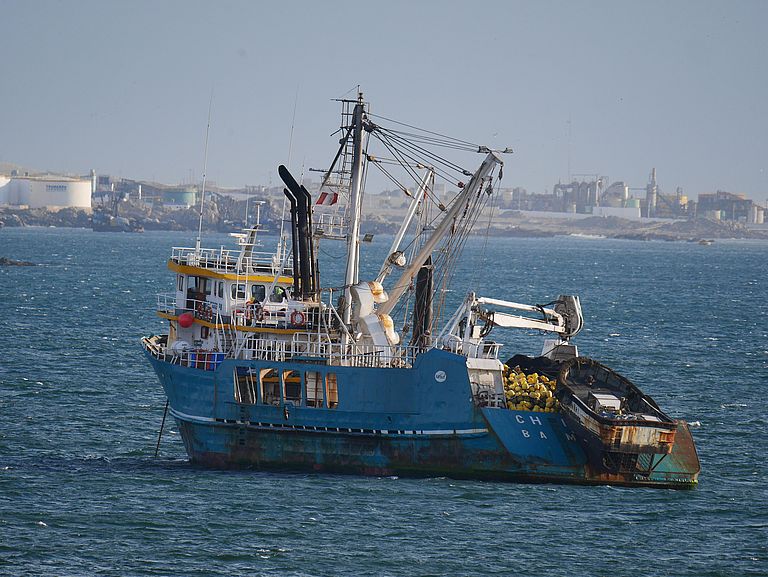 Fishing vessel off the coast of Peru in the Humboldt upwelling system, one of the most productive ecosystems in the world. Photo: Martin Visbeck, GEOMAR 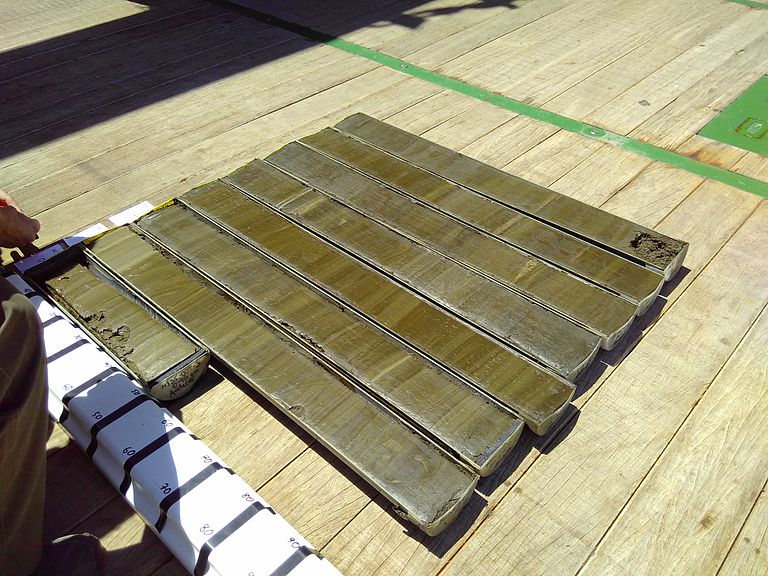 Fundamental changes in the ocean, such as warming, acidification or oxygen depletion, may have significant consequences for the composition of fish stocks, including the displacement of individual species. Researchers at Kiel University (CAU), together with colleagues from Germany, Canada, the USA, and France, have reconstructed environmental conditions of the warm period 125,000 years ago (Eemian interglacial) using sediment samples from the Humboldt Current System off Peru. They were able to show that, at warmer temperatures, mainly smaller, goby-like fish species became dominant and pushed back important food fish such as the anchovy (Engraulis ringens). The trend is independent of fishing pressure and fisheries management. According to the study, the greater warming of the Humboldt Current System as result of climate change has more far-reaching implications for the ecosystem and the global fishing industry than previously thought. The findings appeared in the journal Science on January 2022.

The sea off the west coast of South America is one of the most vital and productive fishing grounds on earth. Around eight percent of the global catch of marine species comes from the areas off the coasts of Peru, where the near-surface Humboldt Current provides a high nutrient supply and thus sufficient food for commercially exploited fish species such as the anchovy. Ten percent of the total global catch of anchovies alone comes from the region. Much of it is processed into fish meal and oil and used primarily for aquacultures in China and Norway. However, catches of anchovy in the Humboldt upwelling system are currently declining. The causes of species shifts are mainly due to climate change according to the results of the new study.

Researchers from the Institute of Geosciences at Kiel University, together with colleagues from GEOMAR Helmholtz Centre for Ocean Research and international partners, have for the first time investigated the relationships between temperature, oxygen, nutrient supply and the occurrence of individual fish species using paleo-oceanographic data from the Humboldt Current region. The scientists focused on the warm period about 125,000 years ago (Eemian interglacial). During this time, conditions were similar to those predicted by climate projections (e.g., the IPCC report) for the end of the 21st century at the latest: comparable primary production but water temperatures two degrees Celsius higher than today and increased oxygen deficiency in mid-depth water masses.

For their paleo-oceanographic studies, the researchers at Kiel University primarily analyzed small fish vertebrae that they were able to isolate from the sediment cores. According to the results, smaller, goby-like fish predominated in coastal waters during the ancient warm period, while anchovies made up only a small proportion. Fish with smaller body sizes can adapt better to warmer temperatures. They retain their high activity even in less oxygenated waters thanks to their larger gill surface area relative to their body volume.

"The conditions of this past warm period that we were able to reconstruct from our samples can definitely be compared to the current development and put in context with future scenarios”, says first author of the study, Dr. Renato Salvatteci, who is currently working at the Center for Ocean and Society of the Kiel Marine Science (KMS) priority research area at Kiel University and in the BMBF-funded Humboldt-Tipping project. "According to this, there is a clear regime shift towards smaller fish that feel more comfortable in the warm, lower-oxygen conditions. We conclude from our results that the effects of human-induced climate change may have a stronger influence on the evolution of stocks in the region than previously thought”, Salvatteci added. Smaller fish are harder to catch and less palatable. According to the report, the impact on the Peru region, local fisheries income and global trade in anchovies could be far-reaching - potentially affecting global food security.

"Our studies using sediment cores can give us fairly accurate information about the changes and their dynamics in highly productive coastal waters around the world that have occurred in the wake of different climate states and over different time scales”, explains Professor Ralph Schneider, a paleoclimate researcher at the Institute of Geosciences at Kiel University and co-author of the study.

The results indicate that due to increasing warming in the Humboldt Current upwelling area, the ecosystem is heading towards a tipping point beyond which anchovy will begin to retreat and not continue to dominate nearshore fishing grounds. "Despite a flexible, sustainable and adaptive management strategy, anchovy biomass and landings have declined, suggesting that we are closer to the ecological tipping point than suspected”, summarizes lead author Renato Salvatteci.

The results of the study help to better assess the extent to which a warming ocean can provide sufficient food for the world's population and what changes should be expected for the development of important fish species such as the anchovy.

"The research findings demonstrate the profound impact of perturbations of marine biogeochemical cycles on the health of marine ecoystems and the availability of human food resources", says Dr. Florian Scholz. The GEO­MAR biogeo­chem­ist is co-au­thor of the study and head of the Emmy No­ether re­search group ICONOX – Iron cyc­ling in con­tin­ental mar­gin sed­i­ments and the nu­tri­ent and oxy­gen bal­ance of the ocean.

The study was funded by the Collaborative Research Center (SFB) 754 "Climate-Biogeochemical Interactions in the Tropical Ocean", a collaborative project of Kiel University (CAU) and GEOMAR Helmholtz Centre for Ocean Research Kiel. Additional support came from the BMBF project Humboldt-Tipping, coordinated at the Center for Ocean and Society, as well as funding from the Emmy-Noether Junior Research Group ICONOX at GEOMAR. First author Renato Salvatteci was further supported by a fellowship from the Alexander von Humboldt Foundation.

Fishing vessel off the coast of Peru in the Humboldt upwelling system, one of the most productive ecosystems in the world. Photo: Martin Visbeck, GEOMAR