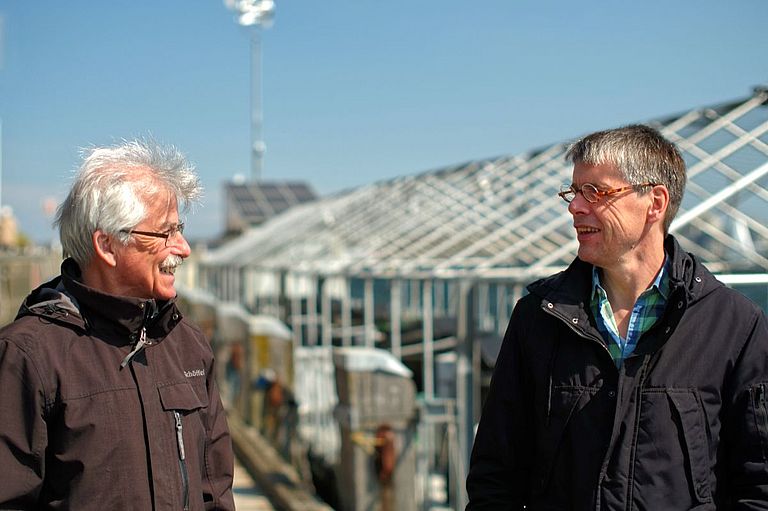 Change in the leadership of the GAME programme

30 April 2021/Kiel. Global marine ecology experiments, international networking and the intensive support of young marine researchers - this is what the research and training programme GAME (Global Approach through Modular Experiments) at GEOMAR Helmholtz Centre for Ocean Research Kiel has stood for for 19 years now. Shortly before his official retirement, marine biologist and GAME founder Prof. Dr. Martin Wahl is now handing over the scientific management of the programme to marine chemist Prof. Dr. Arne Körtzinger.

Whether it is the effects of toxins in ship paints on organisms in the sea or the consequences of heat waves for coastal ecosystems - Prof. Dr. Martin Wahl, marine biologist from Kiel, has always wanted to understand the big picture. Do observations or study results on one's own doorstep show global trends or are they regional peculiarities? As early as the end of the 1990, he encountered a fundamental problem when attempting to combine several regional studies on coastal ecology that had been conducted in parallel in different parts of the world into one overall study. Many of his colleagues were so involved in the national research programmes of their countries that they hardly had time for the proposal from Kiel. Professor Wahl looked for - and found - an alternative. "Students are flexible, motivated and hungry for knowledge. The only thing they often lack is money. If we finance research projects in foreign countries for them, they can conduct the necessary experiments around the globe and at the same time acquire a high degree of intercultural competence," Professor Wahl describes his idea at the time. The basis for the GAME research and training programme was laid.

Now, almost 20 years after the first globe-spanning GAME experiment, Prof. Dr. Martin Wahl is handing over the scientific leadership of the unique programme to his colleague Prof. Dr. Arne Körtzinger from GEOMAR shortly before his official retirement in April 2021. "I am very pleased to be able to hand over this valuable programme to a colleague who is as competent as he is idealistic," says Martin Wahl

"GAME is a success story for science and for the education of young colleagues. It will always be associated with Martin Wahl. I am therefore all the more pleased that I am now taking over this programme and will hopefully lead it into the future just as successfully," adds Professor Körtzinger.

Since 2002, a total of 243 students have participated in GAME and written their respective final theses based on the experiments. The topics have changed from year to year and ranged from the effects of more frequent heat waves, the invasion of alien species in various ecosystems to the impact of microplastics on marine organisms.

Every spring, up to ten students of marine biology or related subjects from Germany and as many more from the partner countries meet at GEOMAR in Kiel. Together they prepare the experiments on the respective focus topic, which they carry out in pairs in the partner countries after the introductory course.

"Over the past 15 years, we have built up a network of 37 partner institutions in 27 countries," explains GAME coordinator Dr Mark Lenz, "the German participants came from a total of 28 different universities." In addition to the participants' theses, 44 peer-reviewed articles have also been published in scientific journals.

In the first few years, the Mercator Foundation financed the unusual programme; since 2010, together with GEOMAR, several foundations and commercial enterprises have been sponsoring the costs of the scholarships and the organisation.

"Global change is accelerating. At the same time, the demands on young scientists in terms of networking and international orientation are growing. So the need for programmes like GAME is growing rather than shrinking," emphasises Martin Wahl. "That is why we hope that we will continue to find funders who are already willing to support research and young scientists equally in this extraordinary format," adds his successor Arne Körtzinger.