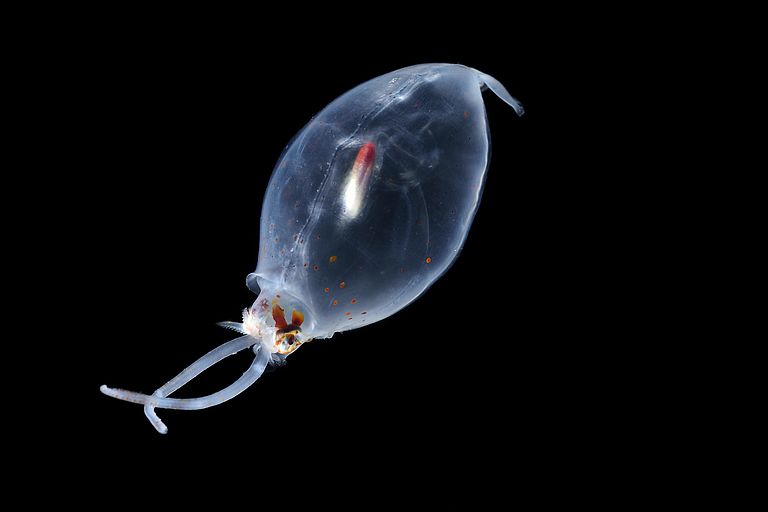 The deep-sea squid Liocranchia reinhardti lives in shallow waters when young and dives into deeper waters as it matures. This squid species is a known prey species of Cuvier's beaked whales. Photo by Solvin Zankl. 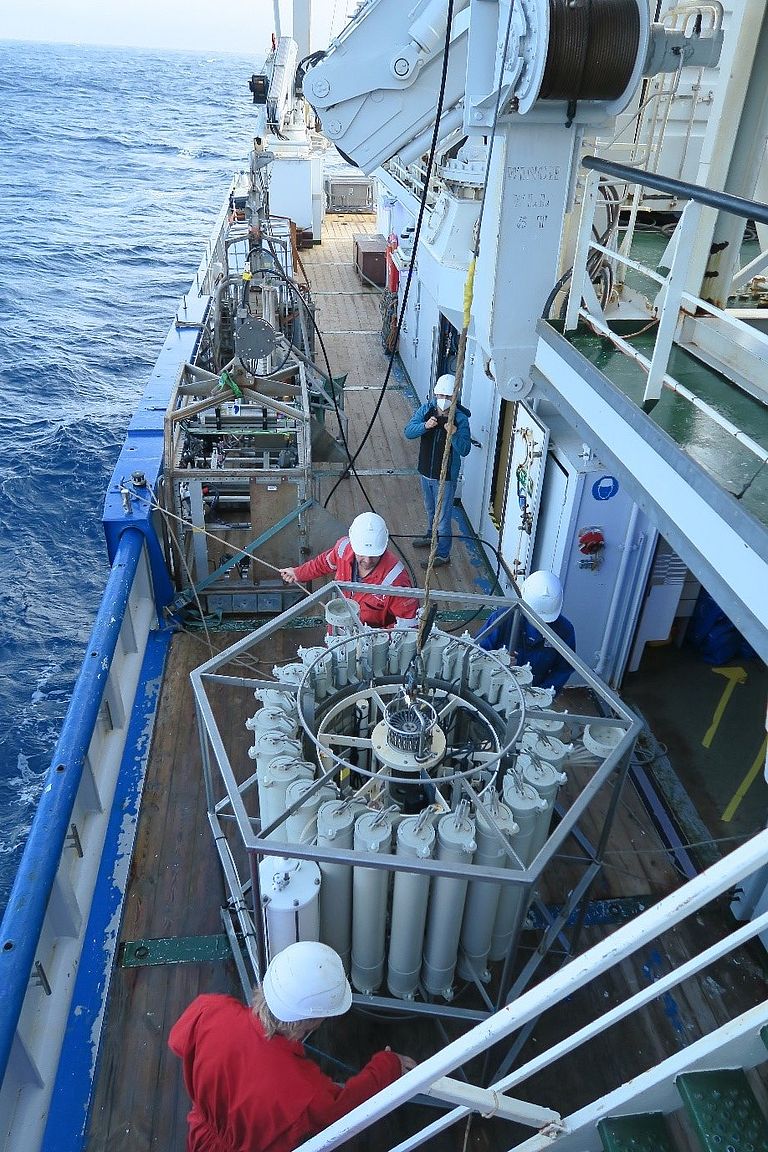 CTD rosette for seawater samples on deck of the research vessel Pelagia for squid eDNA sampling. Photo: C.D. Carriõ, University of the Azores. 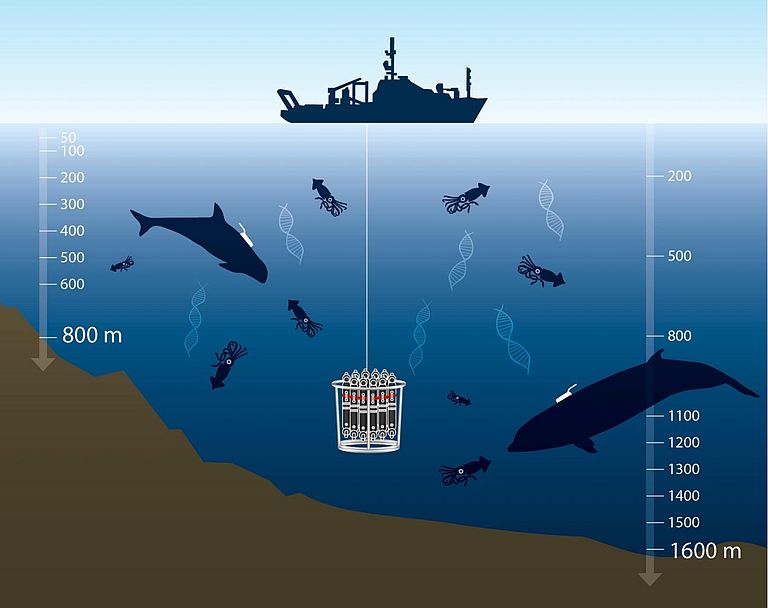 31. March 2021/Kiel/Amsterdam/Texel. An international research team has investigated why dolphins and whales perform record-breaking dives to several kilometres deep. For the first time they were able to match hunting behaviour to the prey present in the hunting zones. The study of researchers from the Netherlands and Germany is now published in the scientific journal Science Advances.

Our oceans comprise 1.3 billion cubic kilometres of seawater. The deep ocean is such a vast environment that we do not know precisely which animals live in it, and how these animals depend on each other. `Due to advances in our ability to observe oceanic top predators, such as sharks and dolphins, we are learning more about their foraging behaviour. Many species of whales and dolphins specifically hunt in the deep sea. The whales choose to reach a remote food source several hundreds of meters to kilometres deep. But they also need to return to the surface following each dive. “The prey reward needs to be substantial to make this round-trip profitable. And this is a true black box. We typically know hardly anything about which squid species are present at which water depth”, says Fleur Visser, researcher at the Institute for Biodiversity and Ecosystem Dynamics (University of Amsterdam) and NIOZ Royal Netherlands Institute for Sea Research.

To better understand and protect the deep sea, we need to know more about its basic life processes, such as interactions between top predators and prey. Top predators are key stone species that structure ecosystem health and biodiversity. Fundamental understanding of predator-prey dynamics in the deep sea only becomes possible when data from hunting techniques are combined with data on prey animals. At the Azores, the researchers pioneered a successful attempt to combine research data from both top predators and deep-sea prey communities.

Deep, and even deeper hunting zones

Risso's dolphins hunt for squid across a different depth zone than Cuvier's beaked whale. Risso's dolphins tracked during the study caught prey between depths of 12 and 623 meters. Cuvier's beaked whales hunted much deeper, between depths of 800 and 1,700 meters and at the deep-seafloor. Whales that dive deeper need more energy to do so. It is only worthwhile to dive deeper if the dive also yields more energy (calories) from prey.

“Sensors that both whale species temporarily carried during dives, recorded data about the depth of the dive and the sounds they make while diving. The animals hunt using sound, with echolocation - just like bats do. After all, it's dark when you dive to hundreds of meters deep, or deeper. Individuals make a specific type of sound when they are trying to catch prey”, says Visser, “called a buzz. This is how we know at which depths they target prey”. The Cuvier's beaked whales were found to make over 30 catch attempts per hour while the shallower diving Risso's dolphins made almost 50 catch attempts per hour. At first sight, extreme diving thus seems to be less successful than more shallow dives, in terms of number of potential prey.

By sampling the seawater at different depths off Terceira Island at the Azores, researchers could determine which squid live at the depths where the whales hunt. “The small amounts of squid eDNA in those water samples were analysed in the laboratory and compared to the known DNA of squid species”, says Véronique Merten of GEOMAR, Helmholtz-Centre for Ocean Research Kiel in Germany. An unexpected find however, was that squid communities did not strongly differ between the hunting zones of the two whale species, even though Cuvier’s beaked whales foraged much deeper. “Both predators have access to a similar selection of squid species”, says Visser, “and we also know that these are part of their diet. It is thus likely that both predators hunt the same prey, but at very different depths”.

“A crucial piece of the puzzle may be the unique reproductive cycle of squid. To increase the chances of reproductive success, many squid species migrate to deeper waters when they mature, to mate and spawn. This is a strategy to avoid predators. These squids with more developed or mature reproductive glands are larger than the individuals at shallower depths. It is also likely that they are more nutritious than their young relatives. At the same time the reproducing individuals may also be easier to catch for the deep diving whales”, says Henk-Jan Hoving at GEOMAR Helmholtz Centre for Ocean Research Kiel. Through extreme diving, Cuvier's beaked whales may gain access to more profitable prey. The difference in hunting zones between the two top predators could have arisen from the availability of prey with larger nutritional value at greater depths.

eDNA is a very promising innovation

Whales are sensitive to threats in their environment, including man-made sounds in the oceans. These sounds can limit their ability to hunt. To better conserve deep sea ecosystems, it is not only essential to study marine mammals and other oceanic top predators. There is an equally urgent need for knowledge on their prey. “This has now become attainable using the recent developments in eDNA methodology”, says Merten, “in particular bigger or rare squid species are extremely difficult to study”. eDNA is really helpful to detect these elusive organisms in the deepest parts of the ocean.

Researchers at GEOMAR are continuing their work on this innovative technique to investigate how communities change over time and identify species that contribute to the transport of nutrients to the deep sea. Ultimately, they also hope to extract information about the abundance of species in the ocean water from eDNA data. “Our methods can be transferred to other predator-prey systems”, says Visser, “opening the opportunity to really advance our understanding of species’ interactions in the deep sea”.

The deep-sea squid Liocranchia reinhardti lives in shallow waters when young and dives into deeper waters as it matures. This squid species is a known prey species of Cuvier's beaked whales. Photo by Solvin Zankl.

CTD rosette for seawater samples on deck of the research vessel Pelagia for squid eDNA sampling. Photo: C.D. Carriõ, University of the Azores.