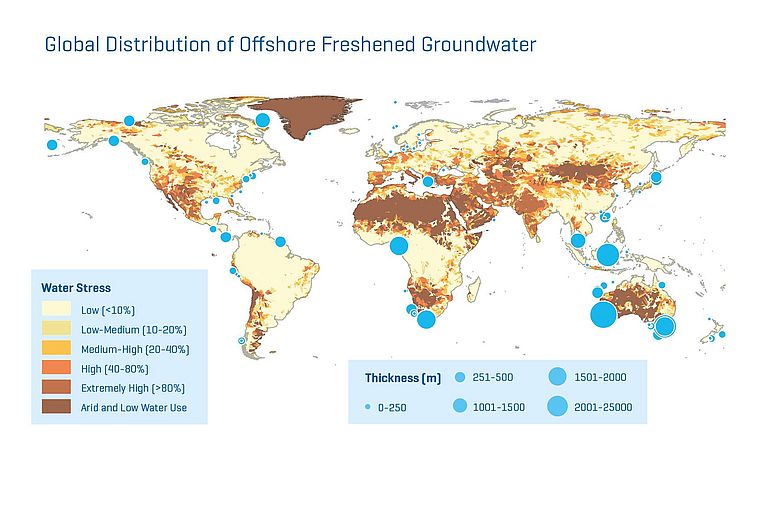 The map provides an overview of OFG worldwide where the thickness of the aquifer is known. From Micallef et al., 2020, edited by Christoph Kersten/GEOMAR

Will drinking water soon come from the seabed?

13 January 2021/Kiel. It sounds like a paradox—in many regions of our blue planet, drinking water supplies could become problematic in the near future. Seawater is salty and therefore undrinkable. However, there are so far unused freshened water reserves below the seabed that have only recently come to the attention of geoscientists. A new overview study published in the international scientific journal Reviews of Geophysics shows the opportunities, as well as the gaps in knowledge, related to these water resources.

Potable water is an essential resource. Although 70 per cent of the earth's surface is covered by water, the bulk of it—about 97 percent—is salty and thus undrinkable. Climate change, global population growth, changing land use and other factors are putting pressure on existing drinking water supplies. For good reason, the United Nations has included a safe water supply as one of its Sustainable Development Goals.

In the 1960s, freshened water deposits were reported below the seabed for the first time. Scientists from six countries, led by GEOMAR Helmholtz Centre for Ocean Research Kiel and the University of Malta, have recently published the first global inventory of such offshore freshened groundwater (OFG) deposits in the international journal Reviews of Geophysics. “In summary, OFG is definitely not a local phenomenon. It has been documented off most of the world's continental margins," says Dr Aaron Micallef from GEOMAR, lead author of the study.

For the overview study, the team evaluated a total of 300 documented records of OFG. They estimate the global volume of these deposits at one million cubic kilometres. That is about twice the volume of the Black Sea and about five per cent of the estimated global volume of groundwater in the upper two kilometers of the continental crust. The deposits are mainly located in areas up to 55 kilometres from the respective coasts and down to a water depth of 100 metres. The OFG was predominantly deposited during periods of low sea level over the past 2.5 million years.

Geochemical investigations of OFG samples recovered during chance discoveries have provided insights into the mechanisms of groundwater deposition. "The latest seismic and electromagnetic methods of seafloor exploration, as well as improved groundwater models, have significantly improved our understanding of the shape and extent of groundwater deposits in recent years, which for a long time had received little attention," emphasises Aaron Micallef.

As part of the MARCAN project funded by the European Research Council, the seafloor offshore New Zealand and Malta, Dr Micallef’s home country, has been investigated with such techniques. "The results we obtained so far are encouraging because we have been able to map OFG in very different geological settings and gain detailed knowledge on how it was deposited," says Dr Micallef.

The study concludes by identifying important gaps in our understanding of OFG, such as the timing of deposition and whether recharge is currently taking place. “This information is crucial if we want to assess the potential use of OFG as an unconventional source of water,” concludes Dr Micallef.

The map provides an overview of OFG worldwide where the thickness of the aquifer is known. From Micallef et al., 2020, edited by Christoph Kersten/GEOMAR