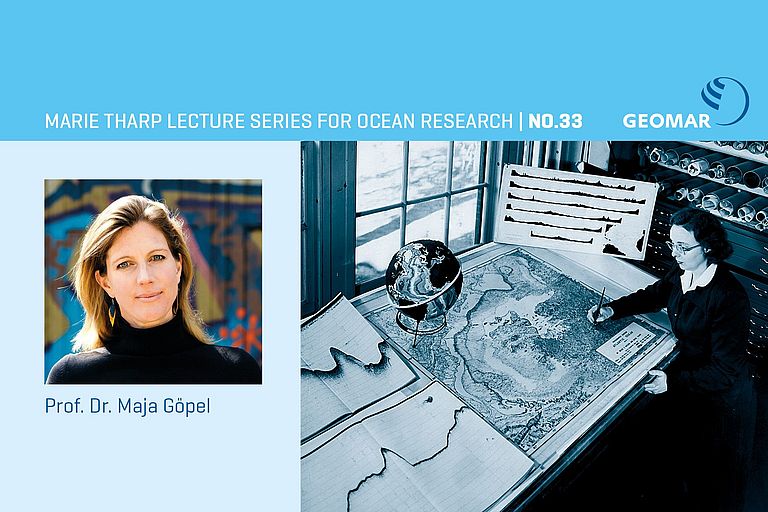 Prof. Dr. Maja Göpel spoke at the 33rd Marie-Tharp-Lecture. She talked about the role of science in a way toward socio-ecologic regeneration and sustainability. 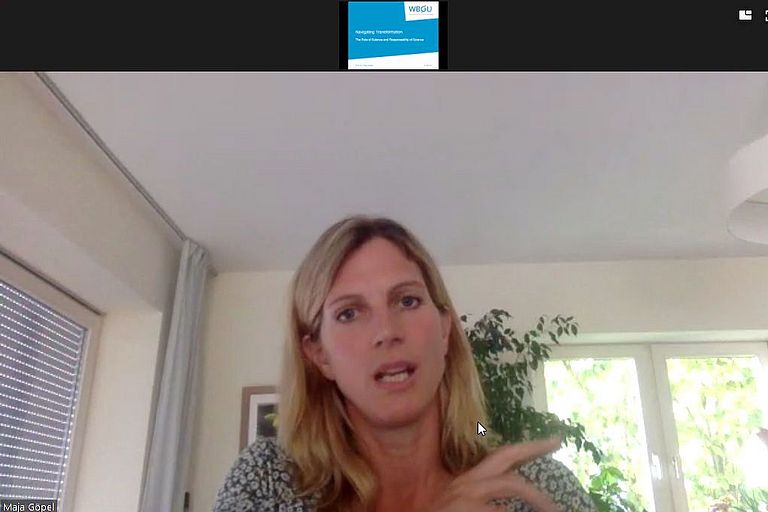 The lecture was presented via livestream. Nearly 90 interested people were there to listen to the Secretary-General of the German Advisory Council on Global Change and discuss the topic afterwards.

Navigating Transformation: The Role and Responsibility of Science

17 August 2020/Kiel. Humanity is facing major challenges. Climate change with all its accompanying phenomena will transform the world. How drastic these transformations will be depends on decisions that global society must make and implement now. ‘Humans are a sense-making species whose unique capacity to observe, reflect, anticipate and communicate enabled it to become the steward not only of its own fate but that of planet Earth,’ says political economist and sustainability researcher Prof. Dr. Maja Göpel. As part of the Marie-Tharp Lecture Series at GEOMAR, she discussed today whether and to what extent science can help in the already ongoing transformation process to find a way towards socio-ecological regeneration and sustainability. In doing so, she raised questions about the role and responsibility of science and discussed experiences from the work in the Scientists4Future network.

With this 33rd edition of the Marie-Tharp Lectures, the organizing Women's Executive Board of GEOMAR also commemorated the 100th birthday of its eponym. The geologist Marie Tharp was born on 30 July 1920. She was a pioneer in the study of plate tectonics and created some of the world's first maps of the sea floor. ‘Just as Marie Tharp explored new paths with her work, we wanted to break new ground with this edition of the lecture series and look beyond the boundaries of our disciplines,’ emphasizes Professor Anja Engel, Chairwoman of the GEOMAR Women's Executive Board. With Maja Göpel, this was the first time a scientist presented her work who does not work in marine research in a stricter sense.

Prof. Dr. Maja Göpel is Secretary General of the German Advisory Council on Global Change (WBGU) and Professor at the Leuphana University in Lüneburg. She focuses on the issues of globalization and sustainability, sustainable development and intergenerational justice. Maja Göpel is also a member of the Club of Rome, the World Future Council and the Balaton Group as well as a Fellow at the Progressive Center. As a member of the advisory board she supports several foundations and projects and is one of the initiators of Scientists4Future.

Apart from the topic, the 33rd Marie-Tharp Lecture was a premiere for a second reason. Due to the current protective measures against SARS-CoV-2, this edition took place online only. However, the lecture was attended by 87 participants and followed by a lively discussion.

The Women's Executive Board has been organizing the ‘Marie Tharp Lecture Series’" since 2013, for which the WEB invites internationally renowned women scientists who, on the one hand, present their scientific work in Kiel, but who, on the other hand, also serve as role models for young female scientists.

Prof. Dr. Maja Göpel spoke at the 33rd Marie-Tharp-Lecture. She talked about the role of science in a way toward socio-ecologic regeneration and sustainability.

The lecture was presented via livestream. Nearly 90 interested people were there to listen to the Secretary-General of the German Advisory Council on Global Change and discuss the topic afterwards.