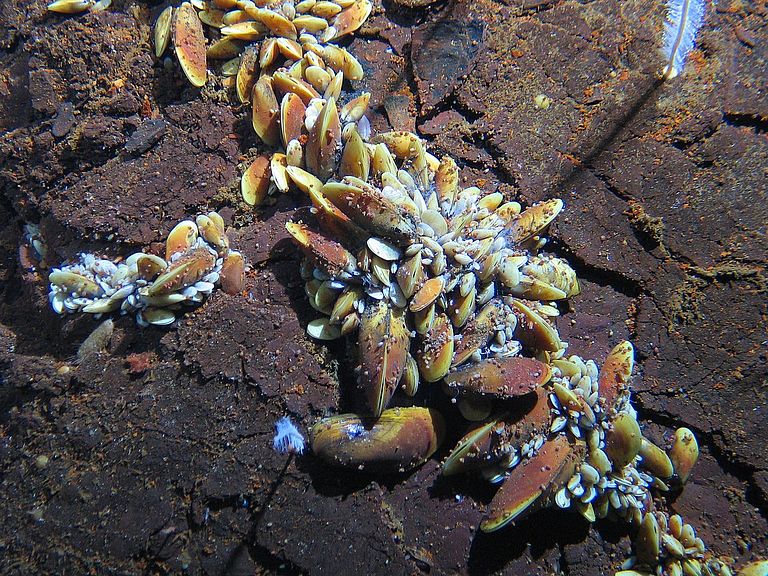 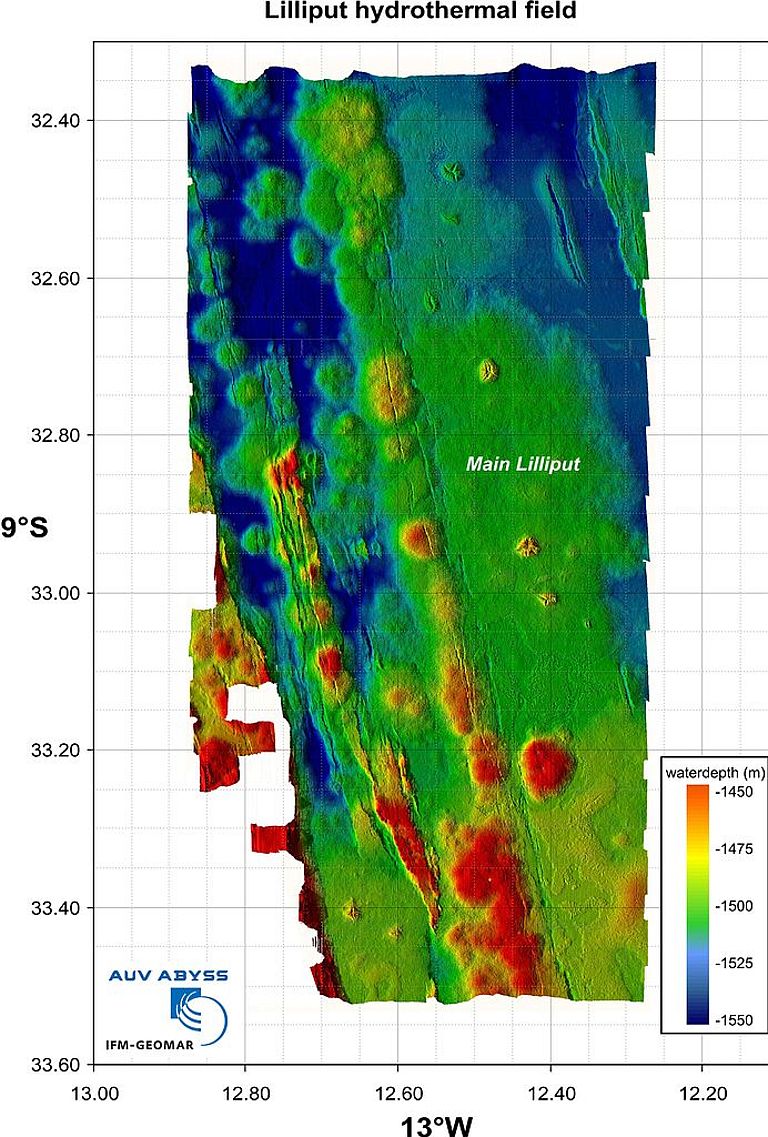 Due to successful work with AUV ABYSS, ROV KIEL 6000 could immediately capture objects of interest such as mussel fields in the Liliput hydrothermal field at 1500 metres depth. Photo: ROV KIEL 6000, IFM-GEOMAR

High-tech in the Deep Sea

12.06.2009/Kiel. The era of new discoveries is not finished yet. Large regions of our planet, in particular the sea floor, are still unknown. Their investigation requires enormous efforts because they lie several thousand metres below the ocean’s surface. High pressure and absolute darkness allow no direct exploitation by humans. Modern equipment such as the remotely controlled vehicle KIEL 6000 and the autonomous operating vehicle ABYSS, both operated by the Leibniz Institute of Marine Sciences (IFM-GEOMAR) in Kiel, Germany, enable new insights in the fascinating underwater world. Now, for the first time, both instruments operated jointly from the German research vessel METEOR, investigating hot vents at the Mid-Atlantic Ridge.

Mid-Atlantic at 9 degrees south: Endless Water wherever you look. On top of the mast of the German research vessel METEOR two black balls with a rhombus in between indicate “heavy equipment in operation”. A few hours ago, a yellow cigar of approximately/roughly four metres was launched: the autonomous underwater vehicle (AUV) ABYSS. Its mission: a high-resolution mapping of the ocean floor in water depths of about 1,500 metres. There, the marine scientists of the METEOR-expedition M78/2 led by Dr. Richard Seifert, a geochemist from the University of Hamburg, hope to find what they are looking for: hydrothermal vents. The Mid-Atlantic Ridge, a submarine mountain ridge with extending thousands of kilometres in the middle of the Atlantic, is a very promising area for this investigation. But three dimensional maps of the location are still not available. Thus the AUV ABYSS from IFM-GEOMAR performs pioneering work and paves the way for another high-tech instrument, the remotely operated vehicle (ROV) KIEL 6000. Once an interesting location is found, KIEL 6000 is launched and delivers video images of the seafloor in real time. The scientists are enthusiastic: steep slopes and naked lava pillows indicate volcanic activity. Moments later, the camera spots large fields covered with mussels next to hydrothermal vents. Crabs and deep-sea shrimps are crawling around, an oasis in the deep sea.

“The resolution of the mapping performed by ABYSS is extremely high. Objects with the size of one metre can be resolved”, explains Dr. Klas Lackschewitz from IFM-GEOMAR. “We were lacking such data when we employed robotic systems like KIEL 6000”, ROV Team leader Dr. Friedrich Abegg adds. “Now we can save a lot of time because we are able to find the objects we are really interested in much faster.”

“This first joint mission of the two deep-sea robotic systems has shown how efficient and powerful state-of-the-art marine research can be today”, states IFM-GEOMAR director Prof. Dr. Peter Herzig. The deputy director Prof. Dr. Colin Devey adds: “With both instruments we can now make more efficient use of expensive ship time and we receive a much better, larger and more accurate data set of the area of investigation.” Devey also chairs the DFG special research project “From the mantle to the ocean” the METEOR expedition with KIEL 6000 and ABYSS were part of. The overall goal of the cruise was the quantification of fluxes at hydrothermal vent systems, the so-called black smokers. After the end of the research mission ABYSS successfully completed its deep-sea test with a dive to 6000 metres.

The discovery of the unknown parts of our planet can go on.

The goal of the DFG special research project 1144 “From the mantle to the ocean” is the investigation of the mid-ocean ridge in the Atlantic in an interdisciplinary approach. Along the mid-Atlantic ridge new material out of the Earth’s interior rises and forms new oceanic crust. This process is accompanied by underwater volcanism and hot vents. The German Research Foundation has supported the project coordinated by IFM-GEOMAR since 2003 with 7,5 million euro. In addition to scientists from Kiel and Hamburg, researchers from Bremen, Hannover and Bonn participate in this project.

Due to successful work with AUV ABYSS, ROV KIEL 6000 could immediately capture objects of interest such as mussel fields in the Liliput hydrothermal field at 1500 metres depth. Photo: ROV KIEL 6000, IFM-GEOMAR