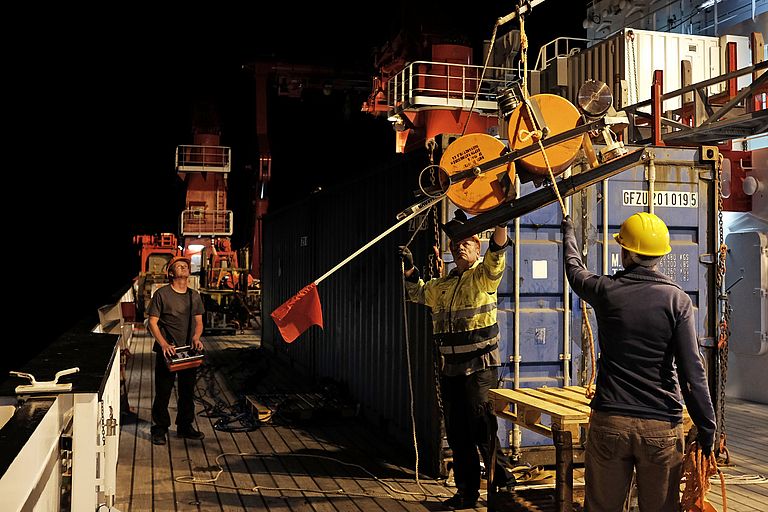 After servicing the OBS, the team of expedition SO244 of the German research vessel SONNE re-deploys an ocean bottom seismometer off the coast of northern Chile. Photo: Jan Steffen/GEOMAR 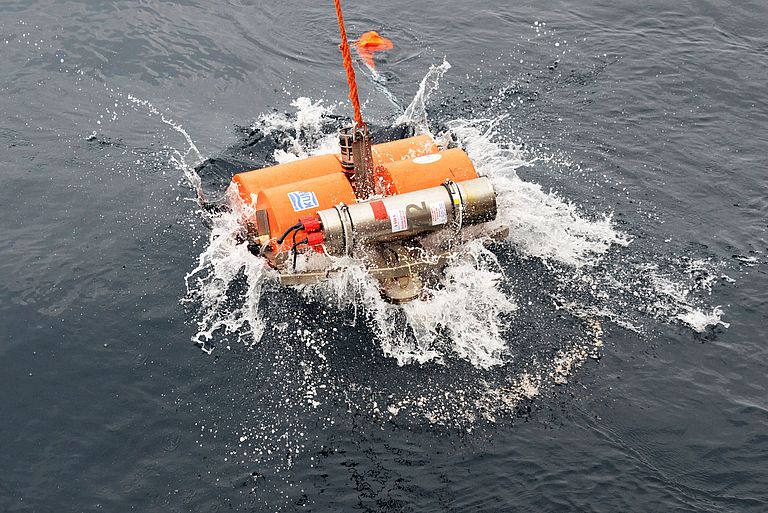 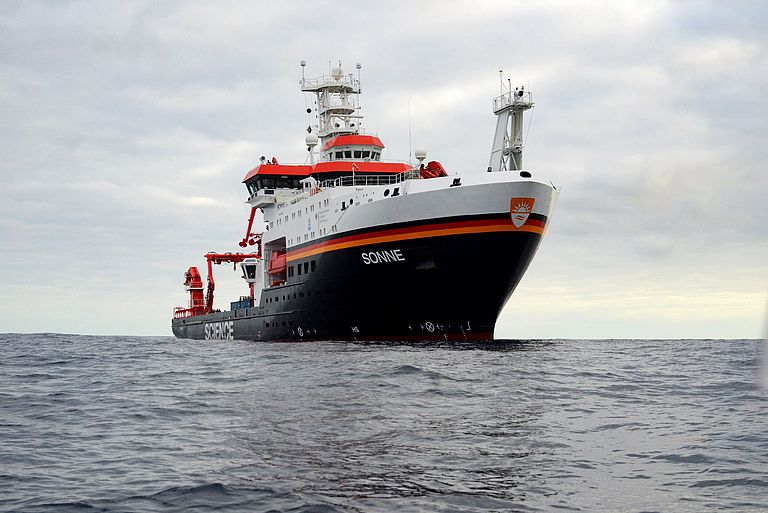 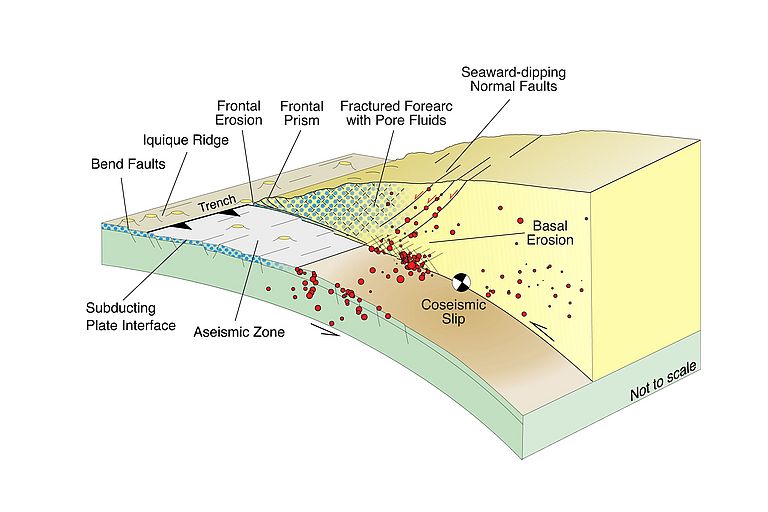 Conceptual model of the subduction zone of northern Chile based on the new data. Noticeable are the many shallow aftershocks (red dots) coastward of the actual main earthquake. Graphic: Florian Petersen from Petersen et al. (2021) in Geophysical Research Letters.

11 May 2021 / Kiel. The most energetic earthquakes occur where oceanic plates submerge beneath continental plates during plate tectonics. Quakes in these subduction zone settings commonly carry the risk of triggering severe tsunamis. But when the earth shook with a moment magnitude of 8.1 near the northern Chilean city of Iquique on 1 April 2014, the resulting tsunami was relatively small. A unique seismological data set, now published by researchers from GEOMAR Helmholtz Centre for Ocean Research Kiel in the international journal Geophysical Research Letters, provides a possible explanation.

Northern Chile is an ideal natural laboratory to study the origin of earthquakes. Here, the Pacific Nazca plate slides underneath the South American continental plate with a speed of about 65 millimetres per year. This process, known as subduction, creates strain between the two plates and scientists thus expected a mega-earthquake here sooner or later, like the last one in 1877. But although northern Chile is one of the focal points of global earthquake research, until now there was no comprehensive data set on the structure of the marine subsurface - until nature itself stepped in to help.

On 1 April 2014, a segment of the subduction zone finally ruptured northwest of the city of Iquique. The earthquake with a moment magnitude of 8.1 released at least parts of accumulated stresses. Subsequent seismic measurements off the coast of Chile as well as seafloor mapping and land-based data provided a hitherto unique insight into the architecture of the plate boundary. "Among other things, this allows us to explain why a relatively severe quake like the one in 2014 only triggered a relatively weak tsunami," says Florian Petersen from GEOMAR Helmholtz Centre for Ocean Research Kiel. He is the lead author of the study, which has now been published in the journal Geophysical Research Letters.

As early as December 2014, just eight months after the main earthquake, the Kiel team deployed 15 seismic measuring devices specially developed for the deep sea off the coast of Chile. "The logistical and also administrative challenges for the deployment of these ocean-bottom seismometers are challenging and eight months of preparation time is very short. However, since the investigations are crucial to better comprehend the hazard potential of the plate margin off northern Chile, even the Chilean Navy finally supported us by making its patrol boat COMANDANTE TORO available," reports project leader and co-author Dr. Dietrich Lange from GEOMAR.

At the end of 2015, these ocean bottom seismometers (OBS) were recovered by the German research vessel SONNE. The team on board serviced the devices, read out the data and placed the OBS on the seabed again. It was not until November 2016 that the American research vessel MARCUS G. LANGSETH finally recovered them. "Together with data from land, we have obtained a seismic data set of the earthquake region over 24 months, in which we can find the signals of numerous aftershocks. This is unique so far," explains Florian Petersen, for whom the study is part of his doctoral thesis.

The evaluation of the long-term measurements, in which colleagues from the Universidad de Chile and Oregon State University (USA) were also involved, showed that an unexpectedly large number of aftershocks were located between the actual earthquake rupture zone and the deep-sea trench. "But what surprised us even more was that many aftershocks were quite shallow. They occurred in the overlying South American continental plate and not along the plate boundary of the dipping Nazca plate," Petersen says.

Over many earthquake cycles, these aftershocks can strongly disturb and rupture the seaward edge of the continental plate. Resulting gaps fill with pore fluids. As a result, the authors conclude, the energy of the quakes can only propagate downwards, but not to the deep-sea trench off the coast of Chile. "Therefore, there were no large, sudden shifts of the seafloor during the 2014 earthquake and the tsunami was fortunately relatively small", says Florian Petersen.

The question still remains whether the Iquique earthquake of 2014 was already the expected major quake in the region or whether it only released some of the stress that had built up since 1877. "The region remains very exciting for us. The current results were only possible due to the close cooperation of several nations and the use of research vessels from Germany, Chile and the USA. This shows the immense effort that is required to study marine natural hazards. However, this is critical for a detailed assessment of the risk to the coastal cities in northern Chile, so everyone was dedicated to the task," says co-author Prof. Dr. Heidrun Kopp from GEOMAR.

After servicing the OBS, the team of expedition SO244 of the German research vessel SONNE re-deploys an ocean bottom seismometer off the coast of northern Chile. Photo: Jan Steffen/GEOMAR

Conceptual model of the subduction zone of northern Chile based on the new data. Noticeable are the many shallow aftershocks (red dots) coastward of the actual main earthquake. Graphic: Florian Petersen from Petersen et al. (2021) in Geophysical Research Letters.