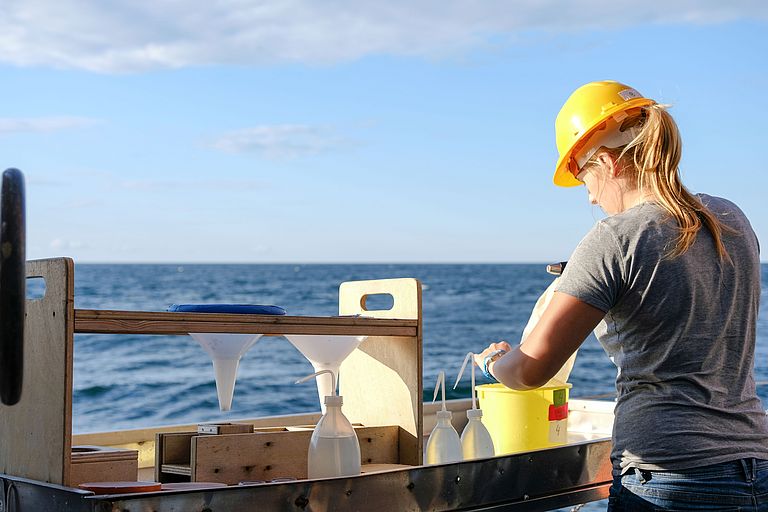 During an expedition to the Baltic Sea, a female scientist processes samples on the research vessel ALKOR. Although about 50 percent of all marine researchers are women by the time they receive their doctorates, their proportion decreases significantly afterwards. Baltic Gender is looking for strategies to avoid this loss of talent. Photo: Sirin Schulz/GEOMAR

On International Women's Day, the EU publishes an article on the Baltic Gender project coordinated by GEOMAR

09 March 2020/Kiel. Yesterday was International Women's Day. For more than 100 years, this day draws attention to gender equality and women's rights. The motto in 2020 is ‘Each for Equal’. But especially in science, equality is not yet part of everyday life. Today, the European Commission has published a success story about the Baltic Gender project, which examines gender equality in marine science and technology in the Baltic Sea region.

Marine research is still considered to be a traditionally male profession. There are still problems such as the gender pay gap or too few women in leading positions. The EU-funded project Baltic Gender aims to remedy this situation.

‘Marine science urgently needs to harvest the full capacities of women and men alike to manage and protect marine and coastal ecosystems sustainably’, emphasizes Prof. Dr. Katja Matthes from GEOMAR, coordinator of the project. With this in mind, the Baltic Gender project partners in five Baltic countries are working to reduce inequality and to better use the skills of their female employees. ‘We have been looking for ways to remove the invisible barriers that prevent women from reaching leadership positions, having the same access to resources as their male colleagues or participating in decision-making,’ says Katja Matthes.

In order to obtain the necessary information, Baltic Gender collected gender-segregated data from all eight participating institutions, revealing the status-quo of inequalities between men and women. In order to address these inequalities, various initiatives were established in the research centres. These initiatives include among others an international mentoring programme and workshops on diverse themes such as leadership, border violations, and unconscious bias.

The project has already reached some of its goals. The project partners in Estonia and Lithuania implemented their first Gender Equality Plans (GEPs) within their research organisations and intend to extend them to entire universities. Recommendations of the project will also be incorporated into the next GEP of GEOMAR .

‘Since its start, Baltic Gender has influenced the political landscape of its partner institutions simply by putting the issue of gender equality on the agenda,’ says Dr. Matthes, ‘but the long-term success relies on a continuous, gender-oriented policy in the partner institutions. At the moment, there are first considerations on how to implement the most successful results of the project in the future and thus ensure the sustainability of the Baltic Gender also beyond the end of the project in August 2020.’

During an expedition to the Baltic Sea, a female scientist processes samples on the research vessel ALKOR. Although about 50 percent of all marine researchers are women by the time they receive their doctorates, their proportion decreases significantly afterwards. Baltic Gender is looking for strategies to avoid this loss of talent. Photo: Sirin Schulz/GEOMAR