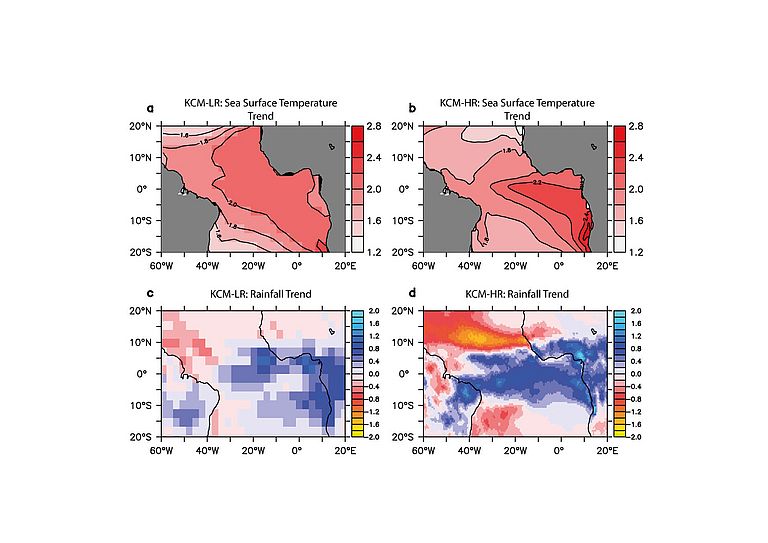 Changes in sea surface temperature and precipitation in a climate change experiment in the tropical Atlantic region in a coarse (a, c) and high (b, d) resolution model. From Park and Latif, 2020.

Comparative study of the GEOMAR illustrates dependence on model resolution

22 September 2020/Kiel. Climate models can only provide an approximation to the real world. Some models still suffer from relatively large biases in the sea surface temperatures of the tropical Atlantic. A new study by GEOMAR Helmholtz Centre for Ocean Research Kiel shows that in a model with higher resolution the errors in the tropical Atlantic are much smaller relative a model of the same family employing coarse resolution. In addition, climate change projections with the high-resolution model show more pronounced changes in atmospheric circulation and precipitation in this region. The results have now been published in the international journal npj Climate and Atmospheric Science.

A long-standing problem in global climate models (coupled ocean-atmosphere-sea ice models) is the too warm sea surface temperatures in the eastern tropical Atlantic, which also influences the nature of the interactions between the ocean and the atmosphere. Simulations at GEOMAR Helmholtz Centre for Ocean Research Kiel show, on the one hand, that temperature errors are much smaller when using in a climate model an atmospheric component with very high resolution. On the other hand, only such a climate model projects a sea-surface temperature response to increasing atmospheric CO2-concentrations that is similar to the warming trends observed since the mid-20th century. Moreover, the atmospheric circulation pattern at the equator, the so-called Walker circulation, is significantly altered in the climate change experiment, leading to greatly increased precipitation in the equatorial region. The scientists have now published the results of their investigations in the international journal npj Climate and Atmospheric Science.

The higher atmospheric resolution greatly reduces the error in the simulated sea surface temperatures of the tropical Atlantic. “This is due to the much better simulation of the surface winds, which is not possible with the coarse-resolution model because the transitions from land to sea regions cannot be represented well enough”, explains co-author Prof. Dr. Mojib Latif from GEOMAR. “The surface winds have a considerable influence on the ocean currents and thus on water temperatures”, explains the climate scientists from Kiel. Thus, according to the authors, the high-resolution atmospheric component configuration of the climate model possibly may provide enhanced future projections in the tropical Atlantic region relative to most other climate models that typically employ a coarse-resolution atmospheric component.

Both model configurations were used in a climate change experiment in which atmospheric carbon dioxide concentrations continue to increase. The response of the two model versions is very different. The high-resolution variant reacts much more sensitive, the atmospheric circulation pattern in the tropics changed fundamentally, the hydrological cycle is increased. In contrast, the coarse-resolution version shows a much weaker atmospheric reaction. “We were somewhat surprised by the clear difference”, says Professor Latif. “But it clarifies that our understanding of all the developments associated with climate change is still immature”, Latif concludes.

Changes in sea surface temperature and precipitation in a climate change experiment in the tropical Atlantic region in a coarse (a, c) and high (b, d) resolution model. From Park and Latif, 2020.