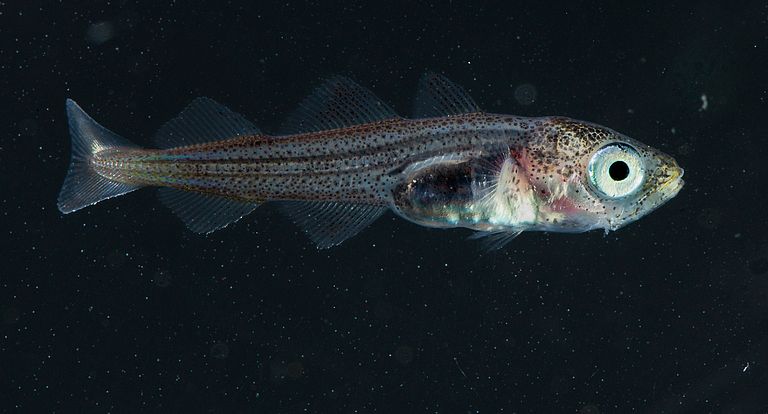 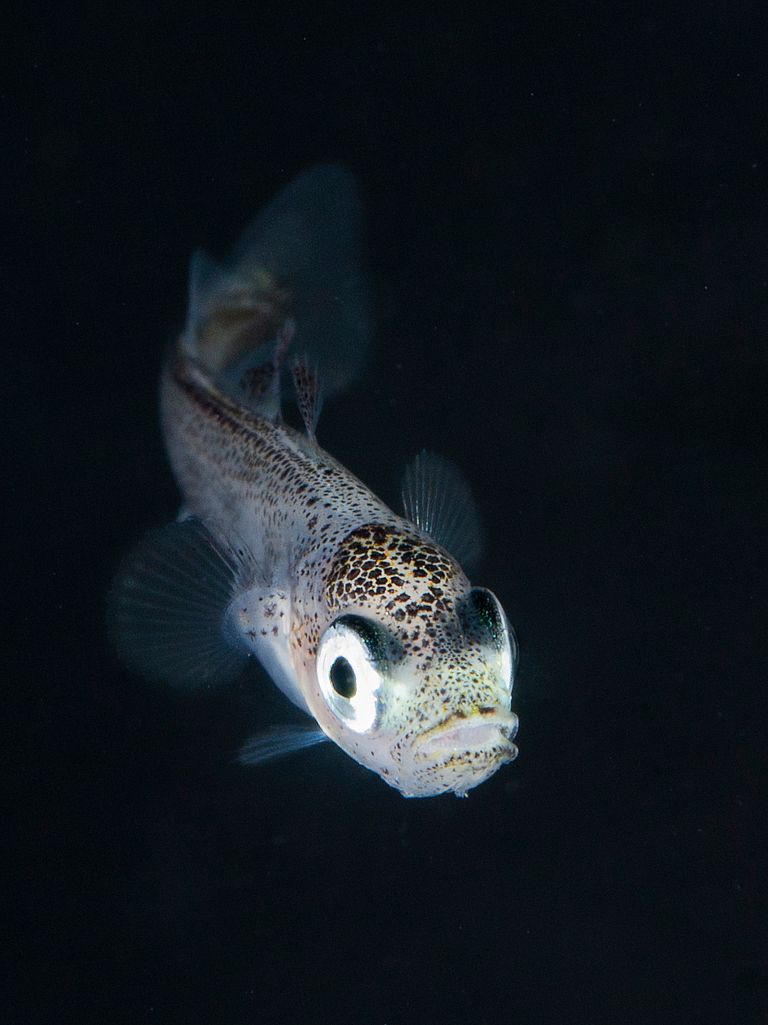 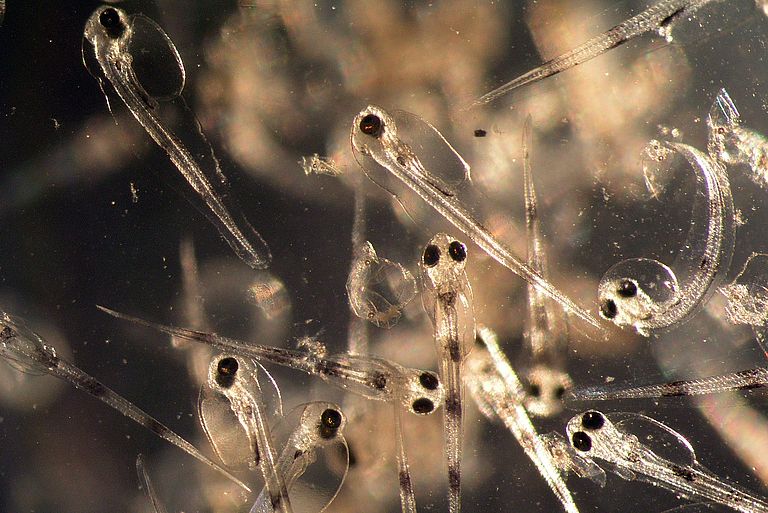 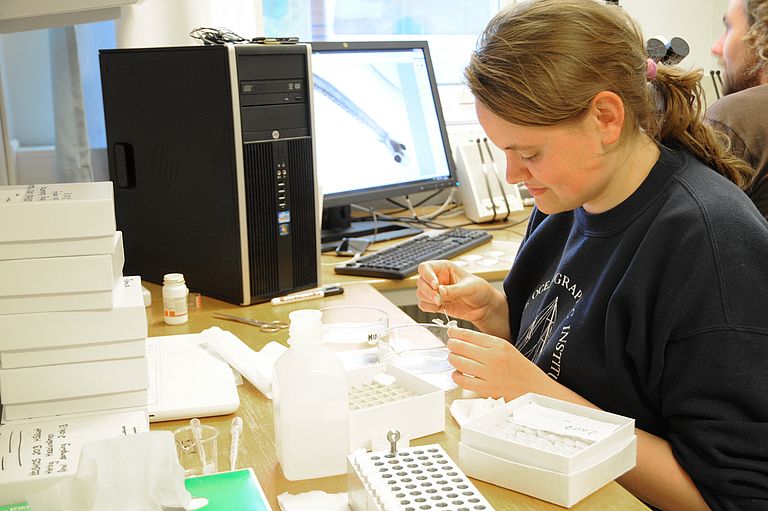 24 August 2016/Kiel. Increasing ocean acidification could double the mortality of newly-hatched cod larvae. This would put populations of this economically important fish species more and more under pressure if exploitation remains unchanged. For the first time ever, members of the German research network BIOACID have quantified mortality rates of cod in the western Baltic Sea and the Barents Sea under more acidified conditions which the fish may experience towards the end of the century. They integrated their results of two several-weeks long experiments in model calculations on stock dynamics. The various model scenarios showed that the recruitment could decrease to levels of one quarter to one twelfth of the recruitment of the last decades – a strong call for action for fisheries management.

As one of the most important commercial species in the North Atlantic, Atlantic cod (Gadus morhua) has been under intense fishing pressure for decades, causing stocks to shrink or crash. In the online journal PLoS ONE, an international team of marine researchers draws attention to another important stressor triggered by climate change: ocean acidification. When additional carbon dioxide (CO2) from the atmosphere dissolves in the ocean, the water gets more acidified – with negative consequences for the behaviour, growth and development of fish larvae.

In two independent experiments, scientists found that the mortality of cod larvae in the critical phase between hatching and the development of the gills was twice as high at elevated carbon dioxide concentrations than at current conditions. The experiments were conducted in Sweden and Norway as part of the German research network BIOACID (Biological Impacts of Ocean Acidification) and the EU BONUS project BIO-C3 („Biodiversity Changes – Causes, Consequences and Management Implications“).

For the first experiment, fertilized eggs and larvae of cod caught in the Öresund were kept in the lab of the Sven Lovén Centre at the University of Gothenburg (Sweden) for six weeks. Some were held in seawater at ambient carbon dioxide concentrations, others were exposed to CO2-conditions that are projected to occur by 2100. Temperature, light and food densities remained at natural conditions. The second experiment was conducted with cod offspring from the Barents Sea in the Centre for Marine Aquaculture Tromsø,NOFIMA (Norway).

“Even though the experiments were conducted in two consecutive years at different research stations under different conditions in relation for example to food or tank sizes and with two different stocks, their results are surprisingly similar”, explains first author Martina Stiasny, PhD student in the research unit Evolutionary Ecology of Marine Fishes at GEOMAR and in the unit for Environmental, Resource and Ecological Economics at Kiel University. “The daily mortality rate for cod from the Öresund under current conditions was nine per cent compared to 20 per cent under increased CO2 concentrations. For the Barents Sea stock, we found mortality rates of seven and 13 per cent respectively.”

The scientists integrated these increased mortality rates into model calculations, which were based on the stock data of the International Council of the Exploration of the Sea (ICES), to calculate the number of cod that will enter the fished population. According to the scenarios, ocean acidification could potentially decrease recruitment to levels one quarter to one twelfth of today’s numbers.

“Our results show for the first time, how ocean acidification can add up to the fishing pressure on stocks of a commercially important fish species”, Dr. Catriona Clemmesen, head of the GEOMAR working group Larval Fish Ecology, points out. “The repercussions of the anthropogenic climate change need to be included into stock projections and considered in the management of fish stocks. Only this will enable us to define realistic limits for fishing pressure and to avoid overfishing and depletion of fish stocks”. To retain the stocks, fisheries ought to adjust to climate change, advises first author Martina Stiasny. “Ocean acidification cannot be completely avoided anymore. But the bigger the stocks are and the more responsibly and sustainably fishing activities are, the bigger the recruitment will remain. This will in the long run not only allow for larger fisheries, but also helps stocks to better adapt to climate change and other anthropogenic influences.”

BIOACID in brief:
Under the umbrella of BIOACID (Biological Impacts of Ocean Acidification), 10 institutions examine how marine ecosystems react to ocean acidification, how this affects the food web and the exchange of material and energy in the ocean and how the changes influence the socio-economic sector. The project is funded by the Federal Ministry of Education and Research (BMBF) and coordinated by GEOMAR Helmholtz Centre for Ocean Research Kiel. A list of member institutions and further information can be found at www.bioacid.de.

BIO-C3 in brief:
13 partner institutes from eight European countries cooperate in the BIO-C3 project (Biodiversity Changes – Causes, Consequences and Management Implications) to address the importance of marine biodiversity and how it might be threatened in the Baltic by climate change. The project that runs from January 2014 to July 2017, is funded by the European Union as part of the BONUS - Science for a Better Future of the Baltic Sea Region - programme and the German Ministry of Education and Research with a total of 4 million Euros. It is coordinated at GEOMAR Helmholtz Centre for Ocean Research Kiel, Germany, assisted by DTU Aqua, National Institute of Aquatic Resources, Technical University of Denmark. Further Information:www.bio-c3.eu