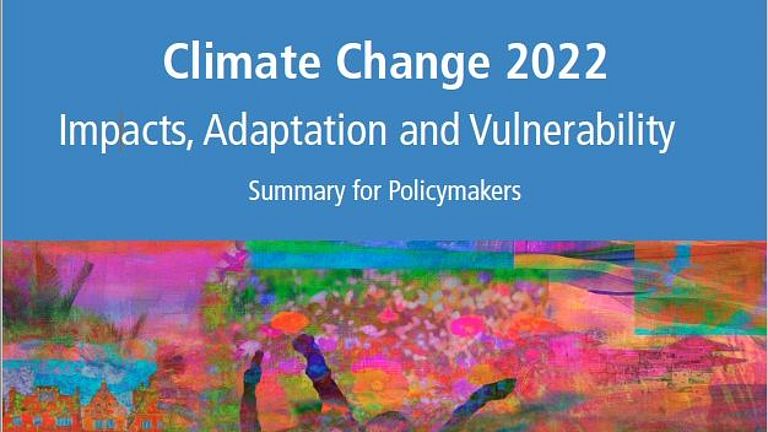 Acting now – to protect the ocean, biodiversity and our climate

28.02.2022/Kiel/Berlin. The report of Working Group II of the Intergovernmental Panel on Climate Change (IPCC) once again clearly shows how much we have already changed the basis of our own livelihoods and what risks can no longer be avoided. But above all, it shows what we can do to safeguard our wellbeing on this planet. More impressively than ever before, the IPCC emphasises the interdependencies between climate, biodiversity and our own existence: Humans are part of the system they affect, and it is in our hands to shape our future in a climate resilient, sustainable and equitable way.

270 authors from 67 countries have analysed thousands of scientific publications over more than three years to show how far climate change has already progressed, what effects it has across all regions of the world and what changes can be expected in the future depending on the development of greenhouse gas emissions and measures to adapt to climate change.

“The report of the Intergovernmental Panel on Climate Change Working Group II provides us with the latest findings for climate action,” emphasises Professor Dr Katja Matthes, Director of GEOMAR Helmholtz Centre for Ocean Research Kiel. “Our respect goes to everyone involved who, despite the pandemic and, most recently, against the background of a dramatically changing political situation, have completed this comprehensive scientific work and adopted it by consensus. Now it is up to all of us to implement the knowledge decisively. Policy is responsible for creating the necessary frameworks for this.”

First steps have already been taken to adapt to climate change, and many more options are available to reduce risks to humanity and nature, according to a key statement from the new report's “Summary for Policymakers”. But the latest projections also show that climate change adaptation is needed even more urgently and quickly than previous IPCC reports assumed. All levels of society – policy-makers, civil society and business – jointly contribute to the success of such action. “As an important part of society, research provides actionable knowledge – not only through the comprehensive evaluations and progress reports of the Intergovernmental Panel on Climate Change, but also through direct, regular dialogue with the public and politicians,” explains Professor Matthes.

In the ocean, the Intergovernmental Panel on Climate Change observes a further increase in warming and heat waves, loss of oxygen and acidification, as well as sea level rise. Already today, biodiversity has declined dramatically, and the risk of further decline increases tremendously with warming above 1.5° Celsius. The changes already affect important functions of the ocean such as climate regulation, food availability and the basis for the wellbeing and livelihoods of many people worldwide. To preserve these functions, the restoration and protection of biodiversity and important natural communities is a crucial basis, the report says.

“Intact marine ecosystems are more resilient against climate change and more able to provide their multiple functions on which our existence on this planet depends," says Professor Dr Thorsten Reusch, head of the research division Marine Ecology and marine biologist at GEOMAR. “For example, so-called 'blue carbon' ecosystems such as seagrass beds, algal forests and salt marshes can help to absorb and store carbon dioxide from the atmosphere. In addition, biodiversity, fisheries and coastal protection benefit from the renaturation and preservation of such habitats. The new IPCC report helps us to identify synergies and use them for sustainable development.”

At the same time, it is important to bring our greenhouse gas emissions to net zero, adds Professor Dr. Andreas Oschlies, Head of the research unit Biogeochemical Modelling at GEOMAR and contributing author of IPCC Working Group III. “The ocean mitigates the impacts of climate change and is threatened by it at the same time. Therefore, options for climate change adaptation and mitigation, nature and species conservation, and sustainable development should be addressed in close connection. The report of the Intergovernmental Panel on Climate Change's Working Group III that will be published at the beginning of April will point out more approaches for reducing our emissions. The ocean is able to support this too, if we protect it and use it sustainably building on scientific findings.”

“Many of the solutions identified in the new IPCC report also contribute to the United Nations Sustainable Development Goals. Ocean-based approaches to climate change adaptation, for example, particularly support Goal 14 ‘Life below Water’ and Goal 13 ‘Climate Action’, especially if they enable significant contributions to the reduction of carbon dioxide concentrations in the atmosphere,” highlights Professor Dr. Martin Visbeck, Head of the research unit Physical Oceanography at GEOMAR and member of the German Ocean Decade Committee. “Thus, the conclusions of the Intergovernmental Panel on Climate Change once again provide an important foundation for international climate policy in the decade of the United Nations Decade of Ocean Research for Sustainable Development, which has just begun.”

“The sooner we act, the more options we keep open for climate change adaptation and mitigation,” judges Professor Dr. Mojib Latif, Head of the research unit Maritime Meteorology and climate physicist at GEOMAR. “In any case, we have to reduce greenhouse gas emissions quickly to avoid irreversible events."