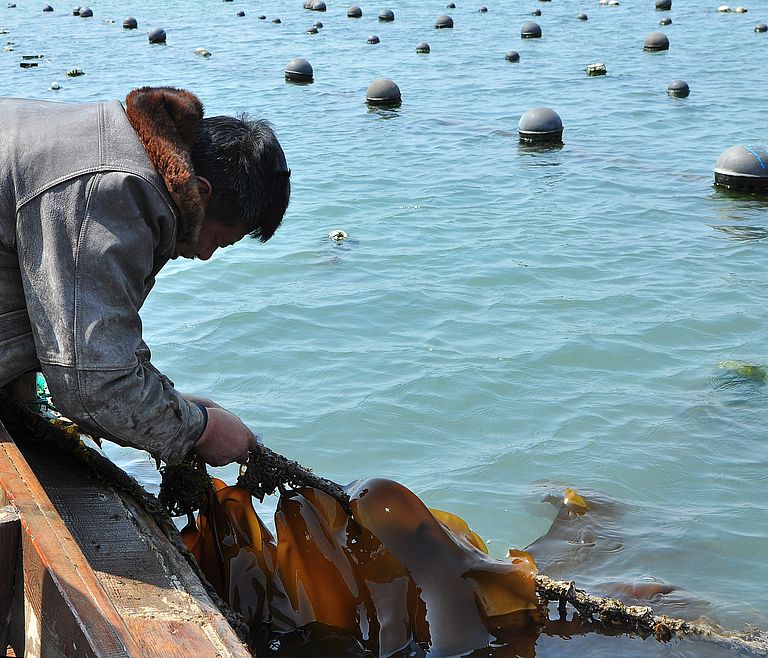 Diseases can be effectively controlled without chemicals

8 January 2019/Kiel/Qingdao. Cultivation of plants in monocultures generally entails an increased risk of outbreaks of diseases or infestations of pests. This risk also challenges seaweed farmers. A German-Chinese team of scientists, in cooperation with companies active in kelp cultivation, has developed a biological plant protection product that provides effective protection against several pathogens. The results of the study, which was coordinated by the GEOMAR Helmholtz Centre for Ocean Research Kiel, have now been published in the international Journal of Applied Phycology.

The aquaculture of marine algae is constantly being intensified worldwide. The largest producer of food algae is traditionally China, where brown algae of the species Saccharina japonicaare cultivated in extensive sea farms. But commercial aquaculture of seaweed has also been tested and established in many other countries in recent decades. In Germany and its neighboring countries, the European sugar kelp Saccharina latissimais cultivated for this purpose. Like land plants, marine algae are also susceptible to diseases and parasites. Disease outbreaks can occur not only in natural populations, but especially during cultivation in the sea, which may lead to considerable economic losses. Especially the recent intensification of algae cultivation in larger monocultures has already led to some catastrophic disease outbreaks, and this also applies to Saccharinaaquaculture. The algae are not only threatened by bacterial pathogens and parasitic microalgae, but also by various fouling organisms - such as barnacles or epiphytic algae - which colonize the surfaces of the seaweed and thus reduce its growth and market value.

In view of these risks, effective countermeasures must be developed. Approaches based on the targeted use of biocides that can be successfully used in terrestrial agriculture to control fungi and other harmful organisms are hardly suitable for algae cultures. The active substances are diluted too rapidly by waves and currents in the sea, making the use of such toxic compounds uneconomical and endangering the coastal environment at the same time.

A recent study conducted by scientists from the GEOMAR Helmholtz Centre for Ocean Research Kiel in collaboration with colleagues from the Ocean University of China in Qingdao has now for the first time tested whether targeted activation of the natural self-defense of seaweed could be an alternative to the use of toxic biocides. In a project funded by the German Federal Ministry of Education and Research (BMBF), the scientists conducted field trials in commercially operated algae farms in Germany (partner company: Coastal Research and Management in Kiel) and in China (partner company: Weihai Changqing Ocean Science & Technology Co. Ltd. in Rongcheng), in which the immune defense of the algae was specifically stimulated. In order to achieve this effect, the algae were treated at different time intervals with a special saccharide (oligoalginate), which forms a major component of the dry mass of Saccharinaand related seaweeds. Under natural conditions, this non-toxic saccharide is released from the infested algae tissue during attacks by pathogens and is then detected with great sensitivity by neighboring healthy algal cells. This recognition then immediately triggers defense reactions within minutes.

The Kiel researchers and their Chinese colleagues were able to simulate attacks by pathogens by briefly treating the algae with seawater containing artificially obtained oligoalginate on a weekly basis and thus achieve positive effects in both the German and Chinese algae species. The loss of algae seedlings was measurably lower, the infestation of mature Saccharinawith parasitic microalgae decreased significantly and the density of bacteria on the algal surface was also reduced.

At the same time, there was also an increase in the infestation of algae with barnacles and other fouling organisms. As the head of the project, Dr. Florian Weinberger from GEOMAR, explained, this undesired side effect is probably directly related to the elimination of protective bacteria from the algal surface: The colonization of algae and other living and non-living surfaces in the sea is significantly influenced by bacteria, some of which produce deterrents against larvae and algal spores. "If one day we succeed in finding signaling substances that trigger more selective defence reactions in the algae, so that not all but only the undesirable microorganisms are eliminated, the method can be even more helpful. However, the method already makes it possible to reduce the losses of seedlings. In very young kelps fouling does not yet play a role," said Dr. Weinberger.