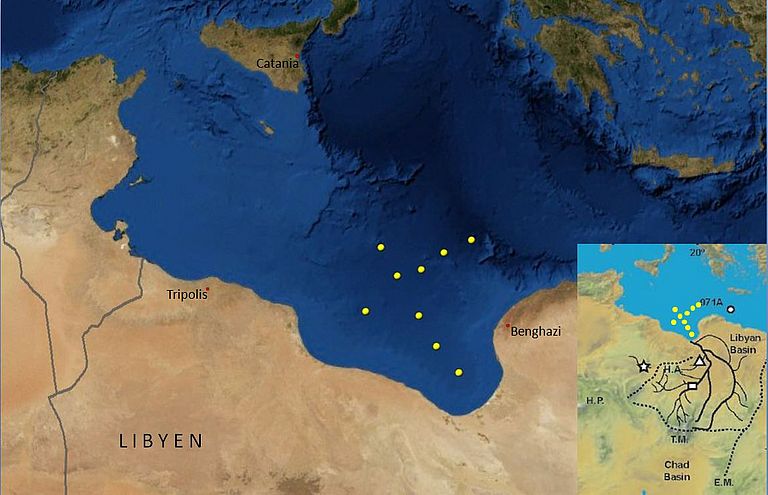 Map of the nine sampling stations in the Gulf of Sirte. (from Osborne et al., 2008) 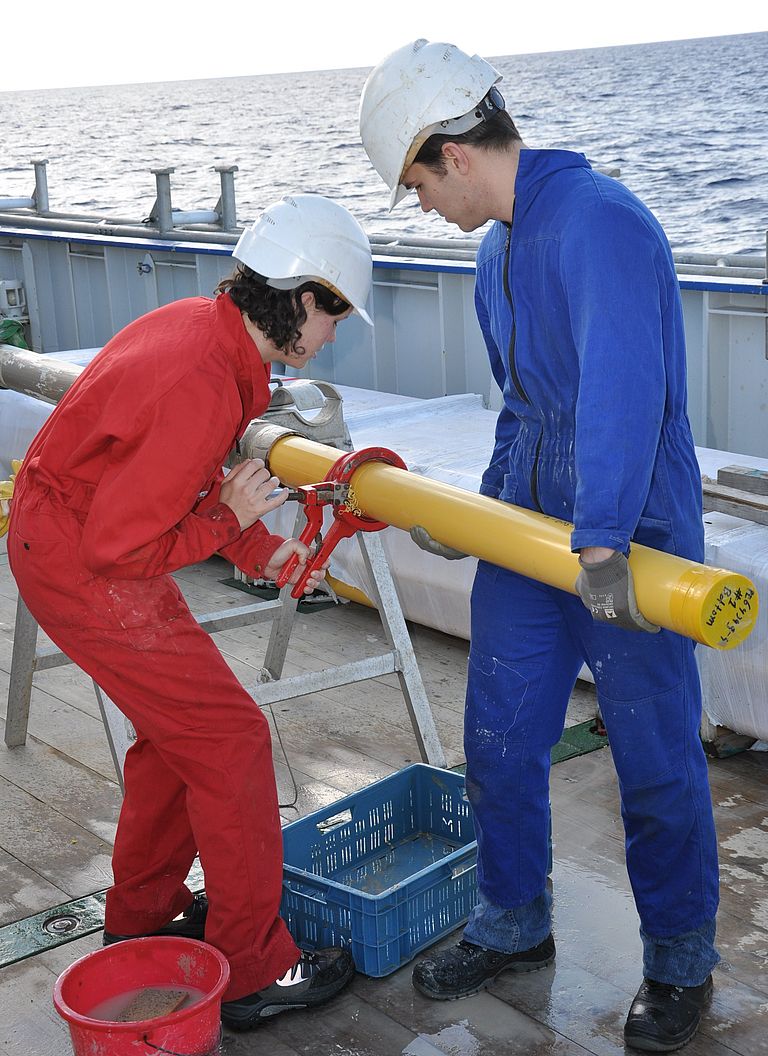 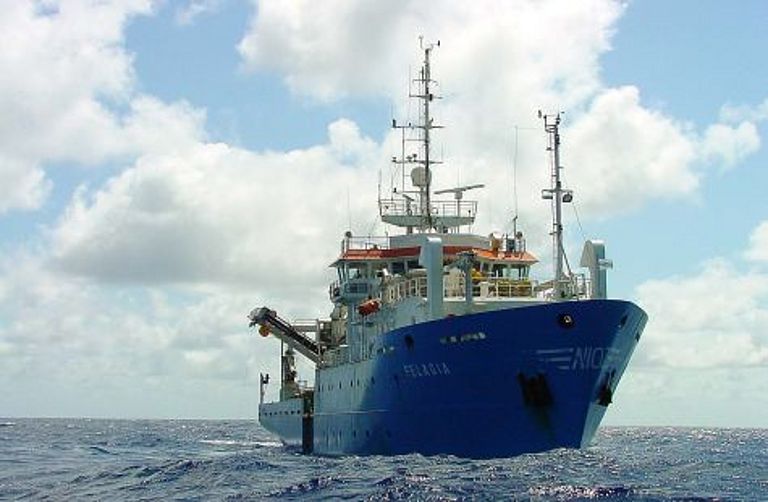 Did our ancestors migrate through a green Sahara?

Oceanographers from Kiel retrieve climate archives from the Gulf of Sirte

December 22, 2011/Kiel. How did modern man migrate from inner Africa to Europe and Asia more than 100,000 years ago? When answering this question the climatic history plays a decisive role. To study this question more precisely oceanographers from Kiel have recently taken samples from the seafloor in the Gulf of Sirte off the coast of Libya.

The development of modern man still raises a lot of unanswered questions. It has still not been proved how Homo sapiens was able to spread out from inner Africa to Europe and Asia. For a long time it was a common belief that the migration took place along the fertile Nile Valley through the North African desert which is usually hostile to life. However some anthropologists and archaeologists were skeptical about this theory for a long time. Recent research on the climatic history of Northern Africa gives support to the skeptics. “120.000 years ago the Sahara region looked very different from today”, the British geologist Dr Anne H Osborne emphasizes. Osborne is currently working at GEOMAR | Helmholtz Centre for Ocean Research Kiel on a scholarship from the Alexander von Humboldt Foundation. In 2008 she published the results of her research in the US journal “Proceedings of the National Academy of Sciences” (PNAS) providing strong evidence for the existence of fossil river-systems in the Libyan Desert which are dried out today. Within the last interglacial period, around 130,000 to 120,000 years ago, the Sahara seems to have had an intensive “green” period. Around this time early modern man started his migration from the cradle of mankind to other parts of the world. “Extensive lakes, seasonal rivers and wide savanna grasslands which elephants and giraffes wandering around - no one would expect anything like this in the Sahara today. And yet there are strong indications that this is what the Sahara looked like back then”, Dr Osborne says. As an alternative to the Nile Valley, regularly afflicted by floods, a green corridor to the Mediterranean Sea revealed itself to the Homo sapiens. This corridor led through a Sahara that was back then dominated by a moderate climate.

A small group of scientists from the GEOMAR has now started a search for more traces of this formerly green Sahara. With the Dutch Research Vessel RV PELAGIA the scientists have gained sediment cores off the coast of Libya in the Gulf of Sirte. “Rivers transport sediments which are then deposited off their estuary. If rivers existed in the Sahara during the last interglacial period which disembogued into the Gulf of Sirte we will be able to prove this with the help of the samples collected from the sea floor”, Dr. Warner Brückmann, geologist from the IFM-GEOMAR and chief scientist of the expedition explains. Working together with their colleagues from the Royal Netherlands Institute for Sea Research (NIOZ) the cores gained will be examined using geochemical and sedimentological methods in order to decipher the history of climate change.

„The access to this part of the Mediterranean Sea had been restricted for a long time. Therefore we are all the happier now that we are able to get samples from this area which we can use to examine the connections between the development of the climate in the Sahara and the migrating process of early mankind”, Dr Brückmann says. And Dr Osborne, who through her publication has initiated the research done now, is happy to continue with her research from the sea perspective. “I am thrilled. This is like an early Christmas present”, she adds to Dr. Brückmanns outlook.

Map of the nine sampling stations in the Gulf of Sirte. (from Osborne et al., 2008)