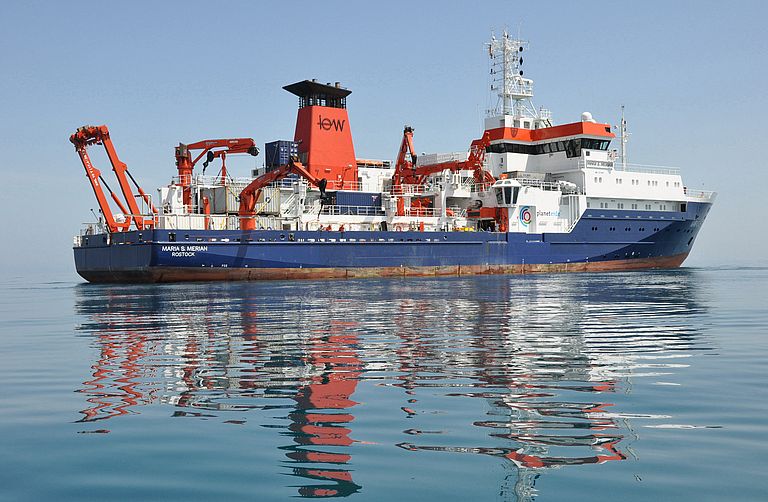 Research vessel MARIA S. MERIAN on sea. The german ship is 94 meters long and will spend the next weeks in the North Atlantic. Photo: Karen Hissmann/GEOMAR 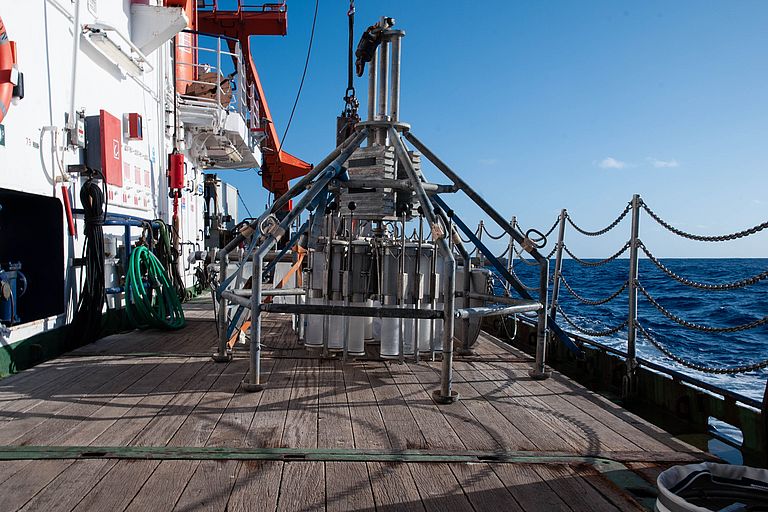 One of the instruments used in this project is the Multicorer, shown here during an expedition of the research vessel POSEIDON in 2019. The Multicorer allows several samples to be taken simultaneously from the seafloor. Photo: Mark Lenz/GEOMAR

9 October 2020 / Kiel. It is relatively simple to map the continents with satellites. But they can’t look into the ocean, leaving two thirds of the earth’s surface out of their reach. Surveying the ocean floor via echo sounders remains laborious and time consuming. During the next four weeks, scientists from GEOMAR Helmholtz Centre for Ocean Research Kiel and Jacobs University Bremen aim to expand the knowledge about the North Atlantic’s floor during an expedition with the research vessel MARIA S. MERIAN by innovatively combining geochemical and data science methods.

Besides some mountains at the borders of the tectonic plates or volcanic hotspots, the ocean floor mostly consists of large muddy plains. This perception is quite popular today. But is it really true? Until now, only 20 percent of the ocean floor have been directly surveyed via echo sounders, with concrete geochemical samples covering an even smaller area. “All we have are basically pinpricks into the giant cloak of the unknown that is covering the seabed”, says Dr Timm Schoening from the research group Deep Sea Monitoring at GEOMAR Helmholtz Centre for Ocean Research Kiel. At least new studies suggest that the sea floor is more diverse than assumed until now.

Scientists from geochemistry and data science are now aiming to expand the knowledge about the North Atlantic’s floor by combining new methods from both disciplines in mapping, sampling and data analysis. At the same time this expedition is used to test the collaboration between the different disciplines. The data received will be made available for the international science community faster than usual. The expedition lead by Dr Schoening will start on October 10th when research vessel MARIA S. MERIAN is leaving the port of Emden.

“We already know that deep sea plateaus aren’t all flat. There are sinks, hills, many different landscapes. It is likely that the composition and appearance between a hill and a sink will differ, and with that the geochemical processes taking place there. This probably affects the local animals and microorganisms. But these differences and the effects they are having are exactly where we still lack information”, Dr Schoening explains.

Obviously, the team won’t be able to map and sample the whole North Atlantic during the four weeks. To solve this problem the team will use multi-stage measurements. Between Ireland and the Mid-Atlantic Ridge, the MERIAN’s multibeam echo sounder will map the sea floor regionally. Additionally, a towed camera system will take photos of the floor at selected locations. They can afterwards be connected to high-resolution maps. At some points a so-called TV-multicorer will be used to take multiple samples from the upper sediment layers at once.

“With the help of new data analysis methods, we want to scale up the results of our samples onto the local photographic maps. The results of these mosaic maps on the other hand will be extrapolated to the echo sounder maps with the help of machine learning”, the expedition’s chief scientist explains.

Additionally, the data will be published faster than usual, fulfilling the FAIR criteria (Findable, Accessible, Interoperable, Reusable) based on new workflows developed in the MareHub project. During the expedition, the research team will already report about their work on sea on their MSM96-Metal-ML blog.

“The expedition is also a great opportunity to improve the collaboration between data scientists and geochemists. Both disciplines are represented in our team and we often notice how different the structures in our thoughts and work can be. A joint expedition offers the opportunity to explore synergies between both disciplines and test them in the field”, Timm Schoening stresses.

The collected data of expedition MSM96 contribute to the project iAtlantic and the research group Bathymetry of the DAM (German Alliance of Ocean Research). Furthermore, they will be used for the GEBCO Seabed-2030 project, which aims to have all sea floors measured via echo sunder by 2030. Participating scientists come from GEOMAR and Jacoby University Bremen.

Research vessel MARIA S. MERIAN on sea. The german ship is 94 meters long and will spend the next weeks in the North Atlantic. Photo: Karen Hissmann/GEOMAR

One of the instruments used in this project is the Multicorer, shown here during an expedition of the research vessel POSEIDON in 2019. The Multicorer allows several samples to be taken simultaneously from the seafloor. Photo: Mark Lenz/GEOMAR