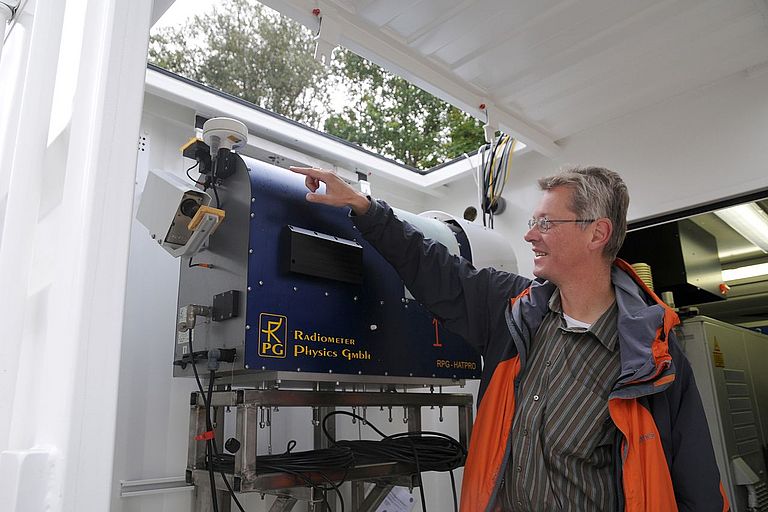 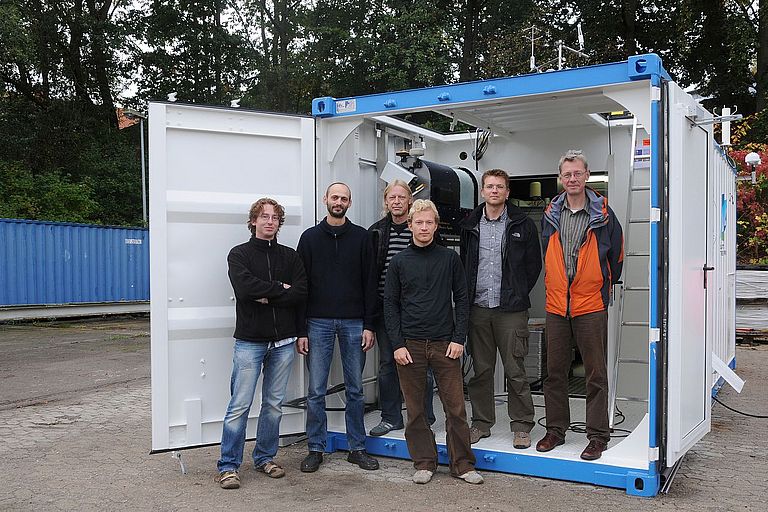 Team of Scientists in front of the OCEANET-Atmosphere. picture: Maike Nicolai, IFM-GEOMAR

Filling the gaps – more and better observations from ocean areas

02. October 2009/Kiel, Germany. On land areas they have been scientific standard for several decades: measurement stations that collect climate data and document the exchanges that take place between the Earth and the atmosphere. Now, such stations become also available on mobile platforms in the oceans. A prototype “OCEANET-Atmosphere” has been developed by the Leibniz Institute of Marine Sciences (IFM-GEOMAR) and the Leibniz Institute for Tropospheric Research (IfT) within the scope of the joint research project OCEANET, and is about to start its first operation.

The oceans are one of the most determining factors for our climate, much more than land, ice and vegetation areas. Thus, local atmospheric measurements that shed light on the exchanges taking place between the atmosphere and the ocean are in great demand but sparely existing. “In terms of data the oceans are a vast gap for us because they are so difficult to get hold of”, says Prof. Dr. Andreas Macke, meteorologist from IFM-GEOMAR and coordinator of OCEANET. “For many parameters we still have to rely on single measurements from research vessels”, says Prof. Macke. “Remote sensing from satellites helps a lot but cannot deliver everything with the accuracy required”, Prof. Macke continues.

The new, mobile measurement station “OCEANET-Atmosphere”, worth about 500,000 Euro, has much more potential. Packed in a standard 20 foot container (seven metres long and two and a half metres wide), and equipped with numerous state of the art instruments, it is ready for the mobile operation on research vessels or cargo ships. Every second it registers several atmospheric parameters, such as the amount of cloud water, the cloud type and the energy exchange between the ocean and the atmosphere. Using a laser, a so-called lidar records the atmospheric dust up to a height of 20 kilometres in order to create a vertical profile of the atmosphere. In addition, an anemometer measures the wind. In the long run the collected data will be sent directly via satellite to Kiel.

„The measurement techniques have become more robust so that the instruments can cope with ship movements”, says Prof. Macke cheerfully. With “OCEANET-Atmosphere” the scientists do pioneer work in the field of atmospheric measurements. The worldwide single mobile atmosphere observatory of this kind is operated by NASA – but only land-based.

On October 16, “OCEANET-Atmosphere” starts its first test run: On the German research vessel Polarstern it will travel from Bremerhaven, Germany, via Punta Arenas, Southern Chile, to the Antarctic, and return at the end of May 2010. Thus, on its first operation the measurement station will pass through all climate zones of the Earth, from the tropics to the Polar Regions. During this expedition four scientists will take care of the precious instruments. In future, OCEANET-Atmosphere will operate autonomously on the world oceans. In the long run the scientists want to establish several of these atmosphere observatories, for example on the North Atlantic. There, they want to record the development of the weather systems in order to improve the weather forecast.

Under the umbrella of the research project OCEANET a group of scientists led by the IFM-GEOMAR want to develop an autonomous measurement platforms to identify the exchange of substances and energy flows between the ocean and the atmosphere. Project partner are the Leibniz Institute for Tropospheric Research, the Alfred Wegener Institute for Polar and Marine Research and the GKSS Research Centre. From 2008 to 2010 the project is funded with a sum of 1,2 million Euro through the Joint Initiative for Research and Innovation. These funding of the Federal Ministry of Education and Research (BMBF) is allocated competitively by the Leibniz Association.

Team of Scientists in front of the OCEANET-Atmosphere. picture: Maike Nicolai, IFM-GEOMAR