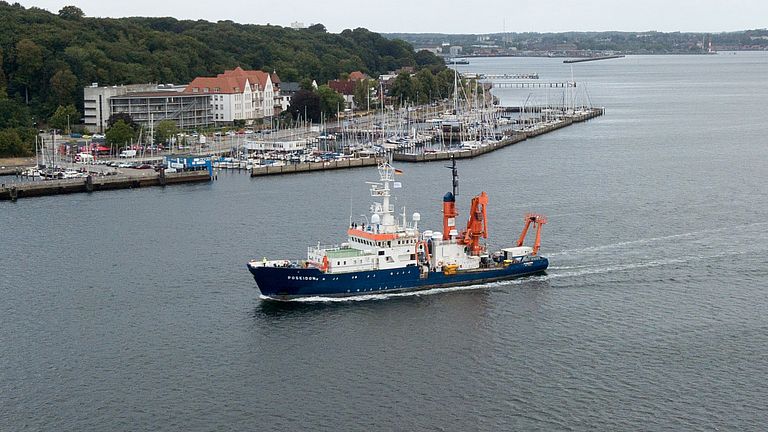 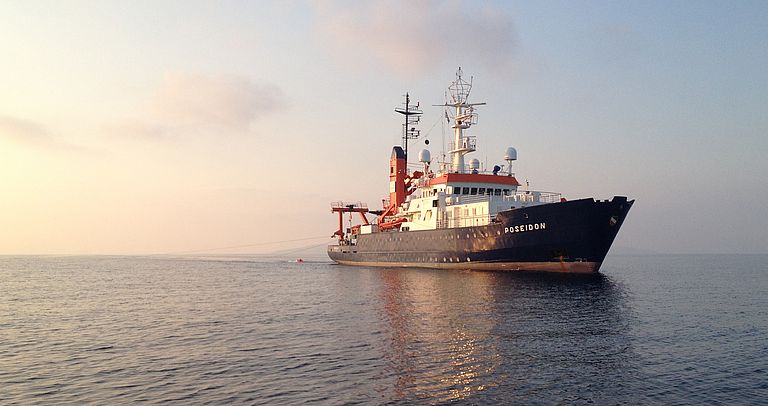 After almost 44 years of operation, a workhorse of German marine research is moved out of service

12. December 2019/Kiel. On 13 December the research vessel POSEIDON of GEOMAR Helmholtz Centre for Ocean Research Kiel returns to Kiel from its 539th and last expedition. Almost 44 years after its commissioning in 1976, an era is coming to an end. Planning for the successor ship, which will also replace the RV METEOR, is already under way, but marine researchers have to wait few more years for it.

Whether North Sea, Black Sea, Red Sea, Mediterranean or North Atlantic: The RV POSEIDON was everywhere. She was also a real all-rounder in terms of content: it sailed for marine biology, geology, geophysics or also for physical or chemical oceanography. And she enjoyed great popularity among scientists: she was very seaworthy, could also call at smaller harbours and the atmosphere on board was considered family. POSEIDON has completed 539 expeditions since its commissioning on August 30, 1976. Now the ship, which is based at GEOMAR Helmholtz Centre for Ocean Research in Kiel, is going into "research retirement" at the end of this year. The oceanographers from Kiel are now waiting for the successor ship that Chancellor Merkel promised already during her visit to GEOMAR in 2012.

“The construction of the POSEIDON also took some time, the first plans date back to 1966," explains Dr. Klas Lackschewitz, ship coordinator at GEOMAR. The ship, built by Schichau Unterweser AG for around DM 23 million (equivalent to approx. EUR 11.5 million), was financed 90% by the then Federal Ministry of Research and Technology (BMFT) and 10% by the State of Schleswig-Holstein and handed over to the Institute of Marine Science in Kiel. It was designed as a seaworthy multifunctional ship that could spend about three weeks at sea.

The RV POSEIDON was equipped with five laboratories, seven winches and powerful crane systems for the use of heavy equipment for a wide variety of research applications. “Now, after more than 40 years, the requirements of science have changed”, says Dr. Lackschewitz. “In addition, maintenance costs are constantly rising, similar to those of an old car, so that at some point it will no longer be economical to continue operating it. That's why we're taking the ship out of service now”, Lackschewitz continued. The POSEIDON is currently being offered for sale by the Federal Disposal Sales and Marketing Agency (VEBEG). At the beginning of next year, it will be decided who will own the ship in the future.

Meanwhile, marine scientists in Kiel are looking to the future. The successor ship RV METEOR IV is expected to be completed in 2024, replacing the RV POSEIDON and the almost 40-year-old METEOR (III; built 1986). The ship will be designed as sister ship of the RV SONNE II, which was put into service in 2014 and currently represents the most modern ship of the German research fleet. “The new ship will meet the requirements of modern marine research and thus contribute to maintain the overall efficiency of German marine research”, explains Prof. Dr. Peter Herzig, Director of GEOMAR. “For us, research vessels are an absolutely necessary working platform for answering socially relevant questions, such as the protection and sustainable use of the oceans, but also global change, using state-of-the-art underwater technologies”, Herzig continued.

For the crew of the RV POSEIDON, the new ship comes too late. “The atmosphere on board is very depressed”, says Klaus Küper from the Briese shipping company in Leer, which operates RV POSEIDON. "Many colleagues have long hoped for a seamless transition to the new ship. Now 25 jobs will in fact be lost in our company, as we are unable to submit a corresponding alternative offer”, Küper continues.

At the beginning of February next year, the marine researchers will celebrate an official farewell to RV POSEIDON with a symposium at GEOMAR.