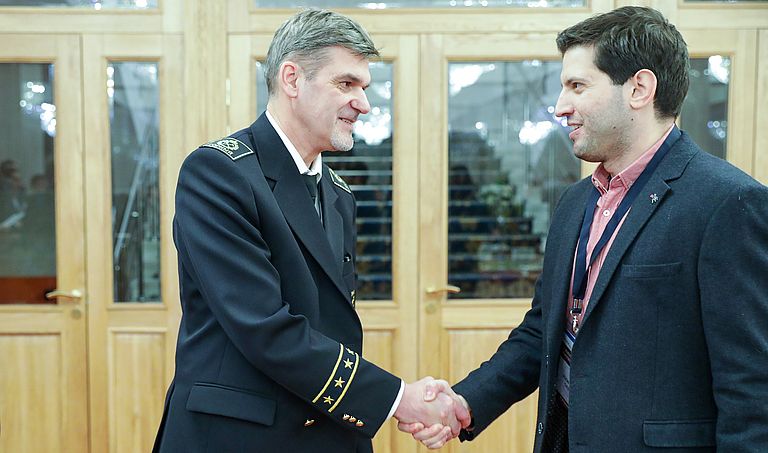 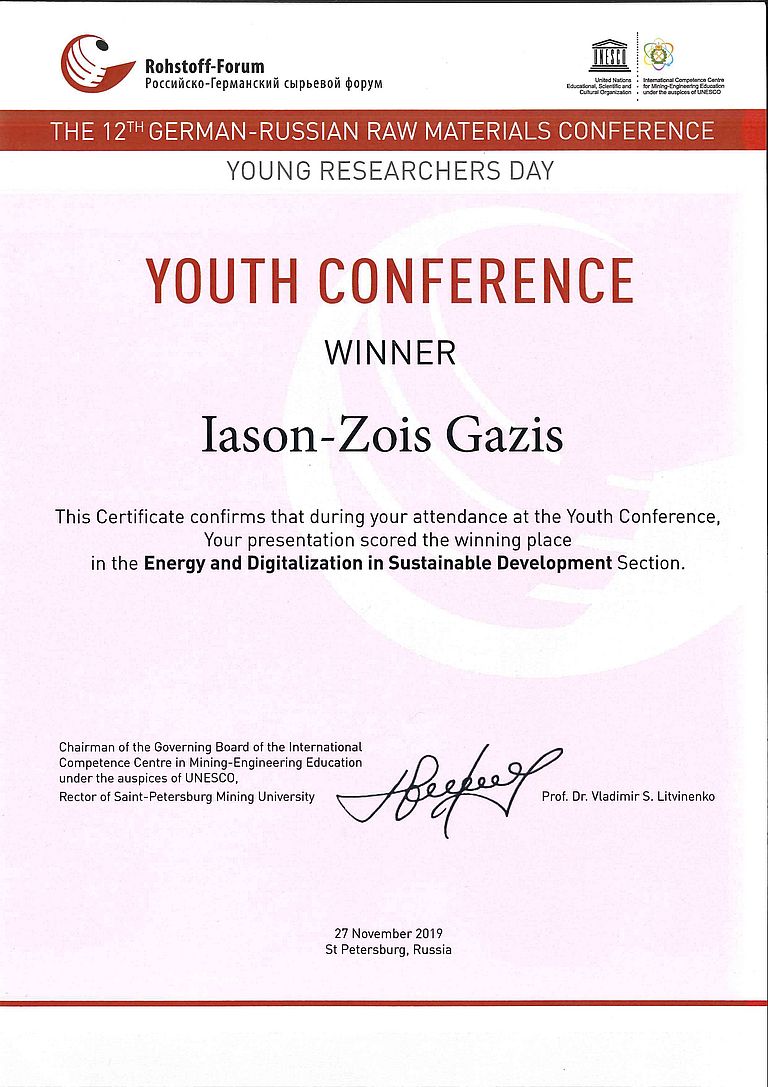 Researcher from GEOMAR receives award at a German-Russian conference

2 December 2019/St. Petersburg/Kiel. At the 12th German-Russian Conference on Raw Materials, which took place from 27 to 29 November in St. Petersburg, Russia, Iason-Zois Gazis, PhD student at GEOMAR Helmholtz Centre for Ocean Research Kiel, received a prize for young scientists. More than 500 participants from science, industry and politics took part in the annual conference, which is organized by the Bergakademie Freiberg and the St. Petersburg Mining University.

How can we quantify as precisely as possible how many manganese nodules there are located on the sea floor in the deep sea? Counting by hand from pictures, estimating sizes and calculating quantities is a lengthy procedure which is not feasible for larger areas. For this reason, automated methods are increasingly being developed to enable reliable quantitative estimates of these raw material deposits. At GEOMAR Helmholtz Centre for Ocean Research Kiel, new methods using automated image recognition methods have been developed for several years in the deep-sea monitoring group. At the 12th German-Russian Raw Materials Conference Iason-Zois Gazis, PhD student at GEOMAR, was honoured for his outstanding presentation of this work.

A special part of the conference was dedicated to young scientists, 50 young researchers (25 from German and 25 from Russian research institutions / universities) to present their work. Out of those, the best presentations were awarded. “It was already a success for me that I was one of the 25 participants selected to attendthe conference," says Iason-Zois Gazis. For those, the travel expenses were covered by the organisers. Of course, he was even more pleased about the award itself, which he received from the Vice-Rector of the St. Petersburg Mining University, Prof. Dr. Igor B. Sergeyev. Gazis, who was born in Athens, studied at the University of the Aegean, Greeceand joined GEOMAR in 2017, where he is now working on his PhD.

“Such an award is always a special appreciation and motivation”, says Prof. Dr. Jens Greinert, head of the deep-sea monitoring group and supervisor of Gazis. For the further career of the young researcher this is very valuable, Greinert continues.

This year's conference focused on the design of future-oriented sustainability cooperation, the climate-friendly transformation of energy systems in both countries and the establishment of a circular-flow economy. In addition to experts from science and industry, high-ranking politicians also attended. This year's guests included the Federal Minister for Economic Cooperation and Development, Gerd Müller, and the Deputy Russian Prime Minister Alexey Gordejev.