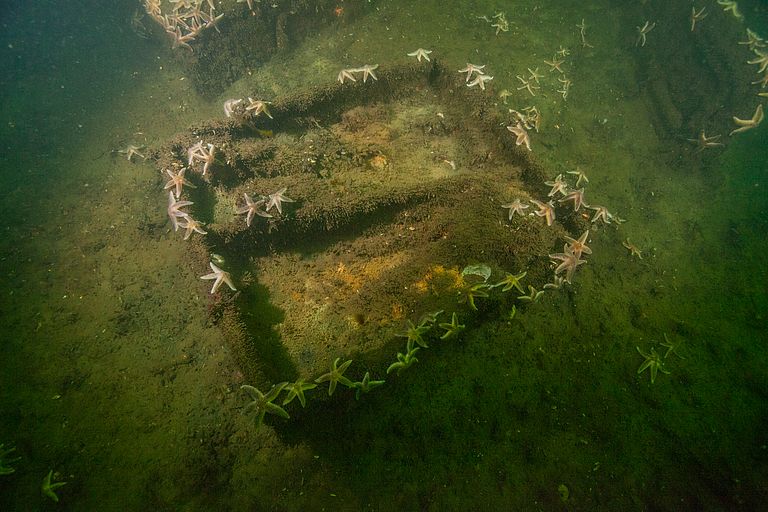 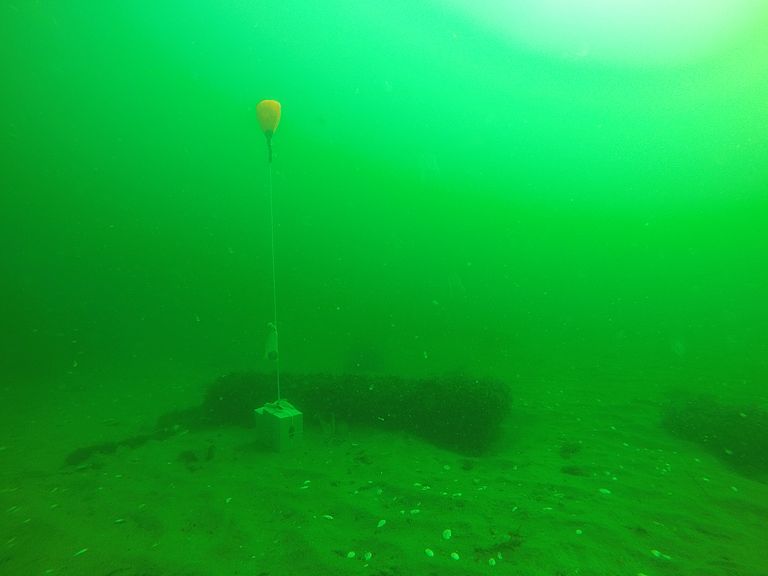 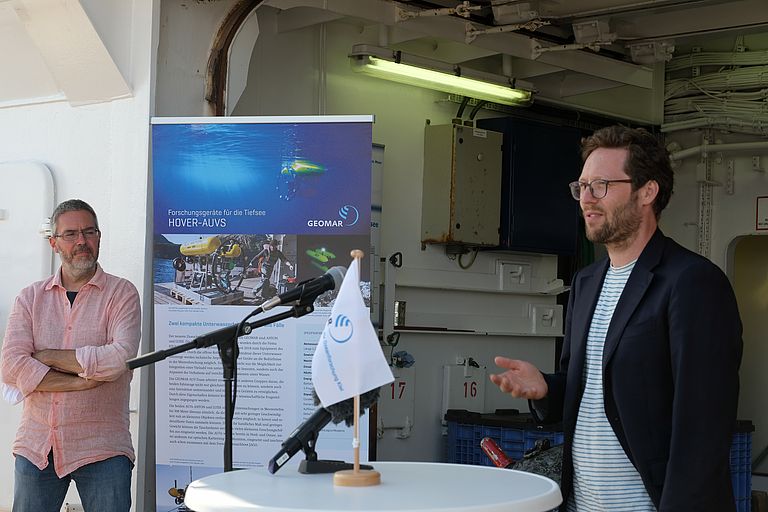 World War II legacy has to be eliminated now!

04.08.2020/Kiel. Not only in the North and Baltic Seas millions of tons of old ammunition and explosives are located at the sea floor. Most of these were dumped after the end of World War II. During a two-day information event for representatives from politics, authorities and science the GEOMAR Helmholtz Centre for Ocean Research Kiel announced that it intends to further intensify its efforts in developing methods for detection and environmentally safe disposal.

Time and again, incidents occur due to unexploded ordnance (UXO) in the seas. Not only the explosion hazard posed by dump sites with high amounts of munition objects is of importance. The ongoing corrosion is causing toxic and often carcinogenic substances to be released into the ocean, putting a strain on the marine ecosystem. Next to it, the search for and detection of ammunition objects that need to be cleared during offshore construction activities poses a special challenge. In recent years, marine researchers, with political backing, increased their efforts to develop new methods for environmental monitoring of contaminants but also for the detection and clearance of munition objects. At the GEOMAR Helmholtz Centre for Ocean Research Kiel, scientists and cooperating industry partners met with parliamentarians and representatives from public authorities to discuss the state of the art in marine research during a two-day information event and to offer a direct insight into the problem on site.

“With this event we are breaking new ground”, explains Prof. Dr. Jens Greinert, head of the deep-sea monitoring working group at GEOMAR. “We do not only provide decision makers with well-founded information, but also demonstrate the problem and the current technical possibilities at first hand during a trip with a research vessel into a munition contaminated area”, Greinert continues.

GEOMAR's research vessel ALKOR took the guests to the “Kolberger Heide”, a dumping area in the Kiel Bay, which is contaminated with old munition of WW II. During this test cruise the scientists used autonomous robots for a targeted verification of potential munition targets. “Old explosive ordnance at sea poses a challenge throughout Europe. Therefore, we are working in cooperation with many national and international partners”, explains Torsten Frey, project scientist at GEOMAR. He is working in the research project BASTA (Boost Applied munition detection through Smart data inTegration and AI workflows) coordinated by GEOMAR with the participation of the Marine Institute of Flanders (VLIZ, Belgium), the software developer EGEOS GmbH from Kiel and the Belgian survey and UXO company G-Tec SA. The aim of this project is to optimize the detection and identification of munition through smart data integration and the use of artificial intelligence. Local partners such as Kiel University, K.U.M Umwelt- und Meerestechnik GmbH and the Ministry of Energy, Agriculture, Environment and Digitization of the State of Schleswig-Holstein (MELUND) are involved in further activities.

“Schleswig-Holstein has been committed for several years to effectively tackle the problem of old munition in the seas on our doorstep”, said Schleswig-Holstein's Minister for the Environment Jan Philipp Albrecht, during a visit to the event at GEOMAR. “We must finally stop idly standing by and watching the munition remnants on our doorstep become an ever-greater environmental problem”, the Minister continued. “That is why I strongly support initiatives to expand and converge the competence in the federal state of Schleswig-Holstein”.

The participants of the event were impressed by the extent and impact of the problem. When you look at the Baltic Sea from the beach, you cannot imagine what lies on the sea floor a few kilometers off the coast. To see this live is impressive and underpins once again the need for action, said the Members of Parliament in unison.

Steffi Lemke, Member of the Bundestag for the Green Party, agrees. “We must act more quickly, before the marine environment and fish stocks are endangered by the ongoing corrosion. The first step is to create a comprehensive inventory and implement regular monitoring of the main areas of pollution”, says Lemke. Already last year, GEOMAR presented a guideline for the monitoring of disposal areas. Olaf in der Beek, member of the FDP parliamentary group in the German Bundestag, urges to start with clearance activities: “We have an industry here in Northern Germany which is unique in the world and has enormous expertise in the clearance of explosive ordnance at sea. The companies are virtually ready to start and are waiting for clearance contracts”.

The head of the delegation of the Baltic Sea Parliamentary Conference Johannes Schraps, SPD: “In recent years, we have put this topic on the agenda again and again. The topic of munition in the sea is not one to close your eyes to, but rather one where time is pressing. Since it is a transboundary issue, European coordination is required”.

“By applying for further research funds, together with partners from other Northern German marine research institutions, through the German Marine Research Alliance, we intend to intensify our efforts in the coming years with the aim of developing efficient methods for monitoring, detecting and disposing of the munition in the sea”, summarizes Prof. Greinert. “We will be dealing with this topic for a long time to come, but time is running out due to the progressing corrosion and increasing sensitivity of the explosive compounds”, Greinert concludes.