The gradual recovery of the ozone layer is expected over the next decades due to the reduction of anthropogenic emissions of long-lived chlorofluorocarbons following the Montreal Protocol of 1987. The sources of oceanic very short-lived halocarbons ( e.g. of bromoform, CHBr3) and their influence on ozone, on the other hand, are increasing. The Halocarbon group investigates the distribution and biogeochemical cycling of natural and anthropogenic halocarbons from various sources (phytoplankton, macro algae, disinfection processes) in the ocean in cooperation with biologists and their air- sea exchange. In cooperation with oceanic and atmospheric modellers, regional and global, spatial and temporal data gaps are closed in order to clarify the oceanic contributions to future tropospheric and stratospheric ozone chemistry.

The work of the Halocarbon group aims at the identification of the main driving factors for the regional and temporal variability of marine halocarbon distributions and emissions and their impact in the troposphere and stratosphere. The tropical oceans are of special significance, as most tropospheric trace gases, including the oceanic emissions of the short-lived halocarbons, enter the stratosphere in the tropics. They are transported towards the winter pole by large-scale circulation in the stratosphere, finally descending to the troposphere at mid and high latitudes again. Hence, tropical processes impact the chemical composition of the entire atmosphere. In the projects SOPRAN, TRANSBROM, SHIVA, ROMIC-THREAT, OASIS, and Astra- OMZ, oceanic halocarbon distributions, sources, their air-sea exchange, transport through the atmosphere and impact on the stratosphere are investigated. The interdisciplinary cooperation with atmospheric chemists and physicists, biologists and biogeochemical modelers, currently further investigates ” Threats to Ozone Recovery from Anthropogenic Emissions of ‘Very Short-lived’ Halocarbons” and the  “Biological control of climate-active trace gases in the surface ocean”.

AIMAC was a three weeks expedition with RV Poseidon on atmosphere-ocean-island-biogeochemical cycles in the Macaronesian region in March 2019 and captured natural and anthropogenic interactions between Madeira, the Canary Islands and Cape Verde, and the open ocean and atmosphere in this highly dynamic region. The analysis of anthropogenic and natural trace gas sources, their emissions and transport into the ocean and their interaction with marine biogeochemical cycles is ongoing.  Coastal regions comprise multiple anthropogenic and natural sources of bromoform and other halogenated trace gases. Current work investigates the source strength of brominated  trace gases form natural and farmed macro algae, as well as from disinfection of seawater, applied in cooling systems of coastal power plants and from desalination plants. Macroalgae and their cultivation for sustainable developments and nature and climate protection form the focus of the Halocarbon group in solution-oriented research. 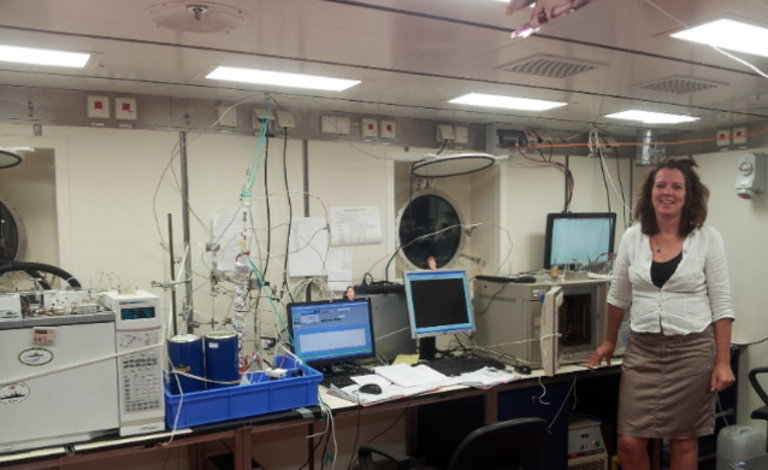 Dr. Quack with GC/MS on board FS Sonne, investigating halogenated volatiles in seawater.